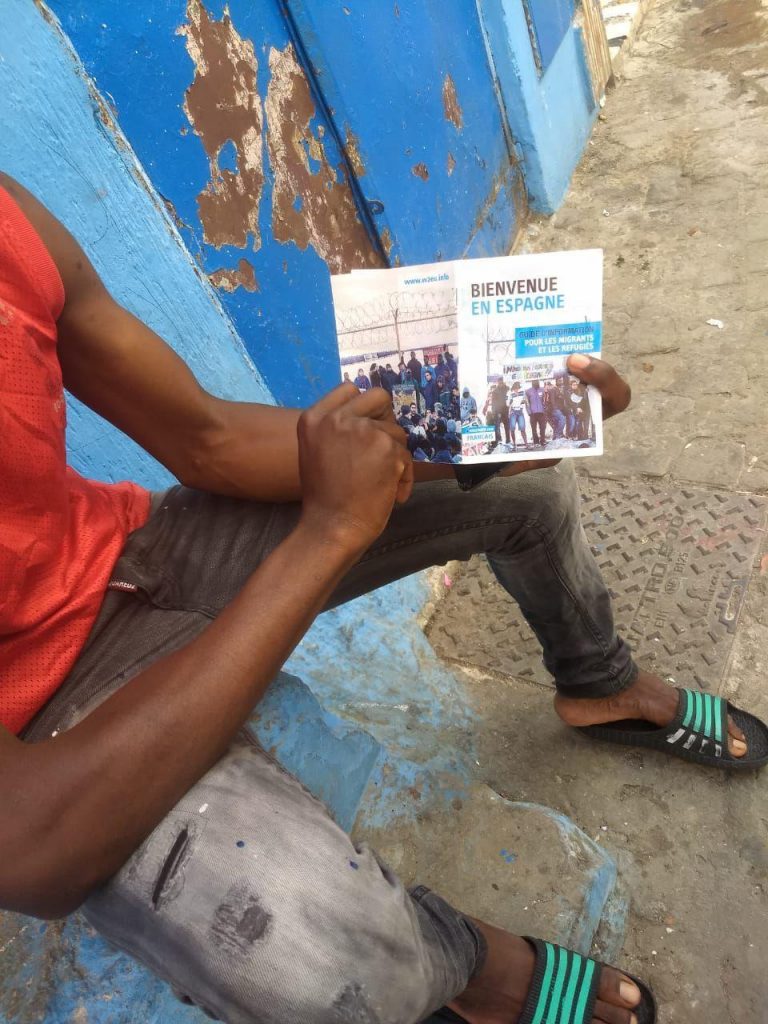 Every call to the Alarm Phone brings with it its own story that deserves to be heard. In the Western Mediterranean, we have spoken to hundreds of people during their sea passages. The situations in which contacts occurred were manifold, ranging from travellers rowing on tiny rubber dinghies during calamitous weather conditions to huge convoys of up to 80 people crossing the Alborán Sea on large boats with engines. While some people were panicking in life threatening situations, others were still making jokes to Alarm Phone members while being in distress at sea.

With more than 58,000 arrivals to Spain, the Western Mediterranean route was by far the most frequented throughout 2018, with the EU border agency Frontex warning that it would become the next ‘migration corridor’ to Europe.[1] From June to the end of October, crossings peaked, and the Alarm Phone accompanied an unprecedented number of boats on their perilous journey, with 91 boats in the last week of July 2018 alone. The response was political repression. Crossings declined from November 2018 but still remained high until the end of the year.

Although the Moroccan Navy has long played the part as Europe’s external frontier guard, intercepting many of the boats that reached out to us, we tended to have a rather good cooperation with the Spanish rescue organization, Salvamento Marítimo (SM). At the same time and especially more recently, we have witnessed a total lack of engagement from both the Spanish and Moroccan authorities in numerous cases, even if an exact GPS location was provided. On some occasions, the travellers had to endure more than a day in severe conditions before managing to paddle back to the Moroccan shore themselves. The Alarm Phone continuously put pressure on the relevant authorities, but often without eliciting a response. Sometimes this politics of non-assistance ended deadly. On 23rd of December 2018, 11 people attempted the crossing. They contacted the Alarm Phone and we called the Coastguards. There was no response. Many hours later, we lost contact to the boat. The travellers are listed as missing at sea, but, undoubtedly, they drowned.[2]

The socialist government in Spain is eager to reduce arrivals via the Western Mediterranean route. They drastically reformed SAR operations in summer 2018. The Guardia Civil became the commanding authority for Spanish SAR operations. This amounts to a militarisation of the formerly civil rescue agency. SM has since stopped actively patrolling the Spanish SAR zone and often refuses to enter the Moroccan SAR zone. SM’s staff, naval and aerial assets were significantly reduced and in multiple cases, boats in distress were blocked by SM until the Moroccan Navy arrived to intercept the travellers. Moreover, SM has stopped tweeting about ongoing rescues. The result is that supporting actors, such as the Alarm Phone, have no access to crucial information. These new policies have undoubtedly been a factor in the disappearance and death of migrant travellers.

Illegal push-back operations occur not merely along the enclaves but also from Spanish islets, as i.e. from Perejil on 17th of March 2019.[3] However, they are mostly practiced at the land borders of the Spanish colonies Ceuta and Melilla, often referred to as ‘express deportations’, for example on the 22nd of August from Ceuta (116 people were illegally removed)[4] and the 21st of October from Melilla on 21 October (55 people were illegaly removed).[5] The fortifications at the land borders are continuously augmented. The latest move is the construction of a new fence on the Moroccan side of the Ceuta border and massive investments in security installations on the Spanish side. Due to a wave of repression in northern Morocco in 2015, which involved the dismantling of many forest encampments close to the enclaves, fewer people have entered Spain by land (from about 11,600 people in 2015 to an average of about 6,500 people in the years 2016–2018). It has not stopped crossings – people continue to exercise their right to move by organising the so-called “attacks” onto the fences, such as in Ceuta in July[6] and August 2018[7] and Melilla in October 2018[8] and May 2019[9].

Repression and the politics of deterrence

One thing that remains unchanged over the years is the behaviour of the Moroccan state whenever increased numbers of sea crossings incite the wrath of its European ‘partners’.

As a response to the sharp rise in crossings via the Western Mediterranean in June and July 2018, the Moroccan kingdom once again intensified raids on and arrests of black people, with or without legal status in Morocco. The first ones targeted were those in the main transit migration hubs such as Tangier and Nador, but later the wave of repression moved to cities further inland. According to the anti-racist group GADEM, more than 6,500 people were arrested and pushed-back to the south of Morocco or towards Algeria between July and September 2018 alone.[10]

These violent and arbitrary arrests continue on such huge scale and remain a daily reality until today. Many of our Alarm Phone members and friends in Morocco have been deported south towards cities such as Tiznit, Errachidia or Agadir several times. These are cities, where many deportees are stranded, living precariously in makeshift camps around the train and bus stations. The deportations to countries of origin also increased. The testimonies of the people detained reveal a total deprivation of the detainees’ rights that should be recognised by Moroccan law. People suffer from police violence and theft of personal belongings. The detainees are kept in courtyards and cells in inhumane conditions, waiting for deportation or to be handcuffed and illegally forced to unknown destinations. And yet, many have not given up, but have returned north, scaling the Spanish fences or taking to the sea.

In light of the peak of arrivals in Spain in the summer of 2018, the EU increased its cooperation with Morocco in matters of border control. This cooperation was established in 2007[11] during various EU-Africa summits. Especially the EU-Emergency Relief Trust Fund for African countries (EUTF for Africa) was used in 2018 to limit and prevent the movement of people in this area. The EU’s agenda in these agreements on strengthened border management has always been to shift European asylum responsibilities further south. Without doubt, the brutality of police raids and deportation practices are a direct consequence of the influence of the EU on Morocco and its demand to ‘tackle’ unwanted migration. But, at the same time, the relations between the EU and Morocco are contested and multi-layered. For instance, the idea of “regional disembarkation platforms in relevant third countries”, a clear instance of the EU seeking to conscript northern African countries into the mass detention of people on the move, has been rejected by the Moroccan government, as well as by Tunisia and Egypt. Also, Morocco’s new centre for observing international migration movements and policies – the African Observatory for Migration and Development (OAMD) – is an attempt by Morocco to position itself more autonomously within the African Union (AU) when it comes to migration control. This indicates how Morocco is using its position as Europe’s external frontier guard to leverage its political position. It would be too simplistic to understand the interests of the Kingdom of Morocco merely in terms of the financial gains from cooperating with the EU in the field of migration policy. There is much more at stake: the economic and political struggle concerning the Western Sahara, Morocco’s attempt to forge a powerful position for itself in the international political context, inside and outside of the AU. And finally, the relations between the EU and Morocco in border security are also always connected to the question of mobility of Morocco’s own population.[12]

The Alarm Phone in the region

Whilst people are constantly resisting the violent effects of inhumane border regimes by crossing borders clandestinely, they also resist in more visible ways. In open defiance of border policies, acts of resistance take place throughout Morocco, not merely at its territorial edges. Here associations and individuals engage in different ways for the freedom of movement for all and the respect of their basic rights. Alarm Phone teams continue to grow throughout the country, deepening ties with local associations, activists and, first and foremost, with communities in transit. We have facilitated and participated in diverse migration-related conferences, political actions and commemorations in Morocco. Alarm Phone members continue to raise awareness among the communities of travellers concerning the risks and security aspects of the sea crossings. We remain in close contact with the community networks and do the crucial follow-ups of cases on the ground. We search for missing people, monitor arrests and violent attacks, collect testimonies, identify dead people in the morgue and pass information to friends and relatives. Through the Alarm Phone, activists from all the different regions, communities and local struggles in Morocco, have established a crucial network to discuss incidents and political developments and to support each other in solidarity.

We use our experience on the ground, to keep the European public up-to-date and to denounce the brutal realities for people who contest the border regime in the Western Mediterranean. Not much is published based on direct reports from the people concerned and media coverage of the situation in the Western Mediterranean is still astonishingly low. The Alarm Phone is a crucial platform and channel for the traveller’s voices, reports and demands. Since no SAR NGOs are engaged in the Western Mediterranean the Alarm Phone remains not only a critical witness, but a crucial actor. Without the courageous work of the members on the ground and the pressure of our shift teams, many rescue operations would not have been initiated or carried out.