The deadly line: militarised borders lead to more deaths in the English Channel

This morning news again broke that people have drowned in the Channel after a rubber dinghy with approximately 47 people onboard appears to have broken apart at sea. Details of the event are still emerging, but the location of the initial search and rescue operation – on the border line separating British and French territorial waters – recalls the situation which led to the deaths of 32 people last year and again raises questions about the coordination of the French and English Coastguards in their duties to save lives at sea.

Unlike the 24th of November 2021, it seems most people on board the dinghy survived and will be able to provide testimonies about what exactly happened early this morning. What we currently know as Alarm Phone is that our partner association working in Northern France, Utopia 56, received a message at 02:53 French time (UTC+1) from a boat in distress. The travellers provided their location: 50° 59.294′ N, 1° 21.087′ E, approximately 15 nautical miles South East of Dungeness point. 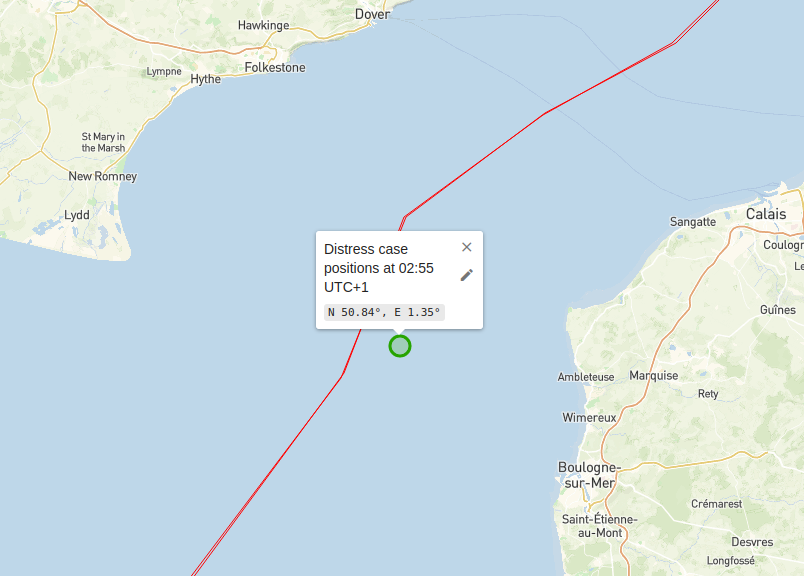 A minute later Utopia 56 received a voice note in English which we have transcribed below:

“Hello brother we are in a boat and we have a problem please help. Uh, we have children and family in a boa. And a boat, water coming … we don’t have anything for rescue for … safety. Please help me bro please please. We are in the water we have a family.”

The sound of a running outboard engine can be heard in the background of the voicenote.

Neither Utopia 56 nor Alarm Phone was able to recontact these people to receive updated positions or confirm if they were rescued.

Utopia 56 called the French Coastguard at CROSS Gris-Nez at 02:57 French time and communicated the boat’s position, the phone number for the people, as well as the distress situation on board. A follow up email was sent to the French Coastguard, Alarm Phone, and the Operations Room at Dover MRCC at 03:13, thus notifying all relevant actors of the location of the boat in distress. For now we do not know if and when the travellers made their own calls directly to the French and British Coastguards, nor what they may have communicated to the Coastguards if they did.

This initial position which was shared was in French waters, although it is likely the boat was continuing its journey due to the engine sounds heard in the voice note. Based on opensource AIS and ADS-B data available through VesselFinder and ADS-B Exchange it does not appear that any search and rescue (SAR) operation was launched by the French. However, this cannot be confirmed as the French military boats operating in the Channel have been known to stop transmitting or spoof their AIS positions, mostly when they are patrolling. Our monitoring has shown that when engaged in SAR operations or standing by a small rubber boat in the Channel they will consistently transmit their positions over AIS to ensure they are visible to other ship traffic.

The first evidence of a SAR operation comes from the British side, around one hour after the initial distress alert. We do not know what information the Coastguards considered before launching a SAR operation, but at approximately 03:40 UTC+1, Dungeness RNLI Lifeboat 13-02 launches and proceeds at top speed to a position 3.65 nautical miles North West of the initial distress position sent to Utopia 56 and meets with the shipping vessel Arcturus BA862 at approximately 04:20 on the border line. At approximately 4:20 UTC+1 the Coastguard helicopter launches from Lydd to join the search and rescue operation and fishing vessel Lass O Doume BM 181, Dover RNLI Lifeboat 17-46, and HMS Severn all proceed to the scene. 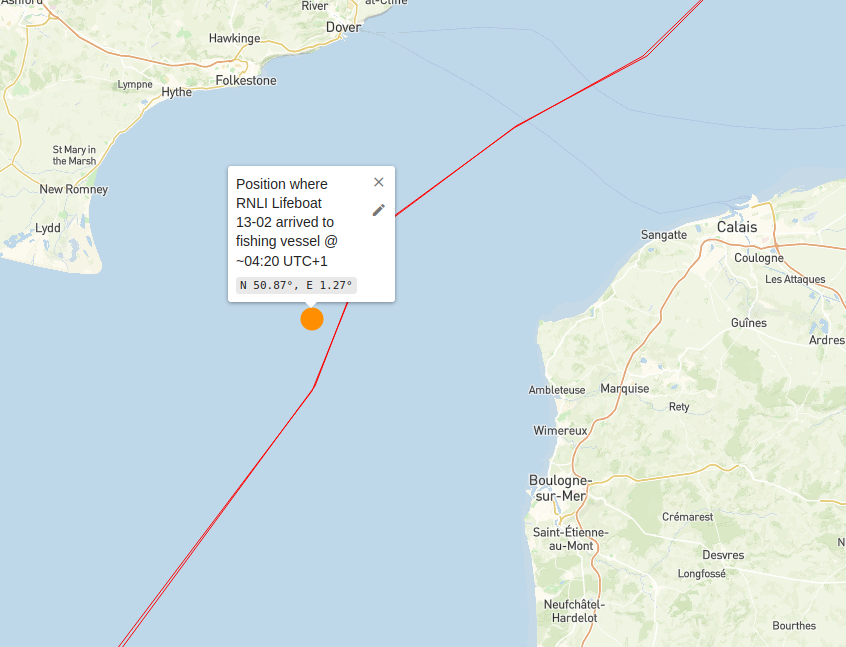 What exactly transpired at sea is, for now, not known. Had the boat capsized? Were people already in the water, and if so for how long?

The fact that the position of the initial rescue operation (as well as those launched later in the morning, after the critical nature of the situation became clear) was on the border line between French and British waters raises urgent questions on the cooperation of the Coastguards to make sure this boat was rescued.

Through handling many cases together with our partners in France, Alarm Phone has been aware that this year small boats have been consistently, if not systematically, accompanied by French vessels in order to make sure they are in place to intervene swiftly should the boat become in distress. However, the boat which Dungeness Lifeboat was tasked to this morning appears to have been unaccompanied by any French vessel.

We have also noticed a change of operation following last year’s mass deaths, and the current investigations which the Coastguards are now facing: the UK Coastguard has been launching Border Force and RNLI rescue boats earlier, in anticipation of people crossing into British waters, rather than waiting for dinghys to already be in these waters before launching a SAR operation.

A fishing vessel, Arcturus BA862, who is reported to have not been alerted to any distress case, happened to be the first on scene. Dungeness Lifeboat was the first SAR asset, and reached the people on the border line. We know Dover MRCC was alerted of the distress case at 03:13 UTC+1 by e-mail. A government spokesman now reports that UK authorities were alerted only at 04:05 UTC+1. Why the discrepency? If the UK authorities were only aware of the case from 04:05 UTC+1 on what information was the Dungeness lifeboat launched at 03:40 UTC+1?

Other questions remain unanswered. Did either the UK or the French Coastguard make contact with the people in the boat after the alert from Utopia 56? At what point did the situation on board deteriorate?

The search and rescue response later this morning was massive: all Lifeboats along the English coast launched, with many French and English Coastguard helicopters as well as military vessels also participating. Despite all these resources it was not enough to save the 4 people confirmed dead. While we ought to recognise the efforts of all search and rescue actors in these case and over the past months in the Channel the final question remains: why were these 43 people and thousands of others forced to make such a dangerous journey? Lives will continue to be lost if states persist in reinforcing militarised borders rather than allowing all people to access existing routes to cross the Channel by ferry and train. Yesterday’s announcement from the British Prime Minister confirms the UK government’s intention to continue to illegalise the movement of some. Freedom of movement for all is the only way to prevent loss of life like today’s.