Boat on fire off Libya: up to 60 people killed

On Thursday, 18 March 2021, a tragedy unfolded off the Libyan coast. Survivors report that about 60 people went missing and are presumed dead after their boat engine caught on fire.

At 02.30am CET, a grey wooden boat with more than 100 people on board called Alarm Phone. The people on the phone were in panic, as their engine was on fire. Alarm Phone alerted relevant authorities as well as the Ocean Viking and requested an immediate search for the boat in distress. The rescue vessel Ocean Viking started a search operation. Unfortunately, the people in distress were at first unable to provide an accurate GPS position. Only at approximately 08.00am were we able to obtain a reliable position of the boat in distress.

The Libyan authorities later reported that the boat was found and that 45 people had been rescued while five bodies were retrieved. The Libyan authorities mention no further deaths. However, several survivors reported to Alarm Phone that there had been more victims than survivors. According to the testimonies we have collected, about 45 people were rescued by fishermen but about 60 people are still missing and presumed dead. 60 people killed by the EU border regime. In silence. In order to break this silence, we provide several witness testimonies in this report.

Survivors know that their testimonies will not bring back their friends, but they bravely speak up after these tragedies to counter the lies and silence of authorities, and to document the violence that Europe seeks to hide by making these deaths invisible.

Besides survivors, also several relatives got in touch with Alarm Phone to ask for answers. They told us they had tried to call the Italian authorities for information on what happened to their loved ones, but have not received any information. They say: “We want to know what happened and the whole truth. What did authorities do to search for the missing.”

In what follows, we report some of the testimonies we have collected as well as a detailed timeline of the events for relatives to know what happened. We request authorities to provide a detailed report of the actions they have undertaken to search and rescue the people in distress, to search for the missing and for the bodies of the dead, and to answer any open question around the unfolding of the events during and after the rescue operation conducted by fishermen.

We were more than 130 people, most of them young people from Sudan and Senegal, four people from Syria, two from Pakistan and seven Moroccans, and with us about four Egyptians, and we also had children and women. The wooden boat, was large and consisted of two floors and a length of 12 meters. The smuggler warned us strongly that no one should light a cigarette on a boat. We went and pushed the boat to the sea. I was afraid of the strength of the waves, the waves were very high. I was waiting for my turn to go up on a boat and I was taking time to avoid descending to the lower floor. But then they told us that the boat was full. About 35 people could not be embarked. We were psychologically devastated, disappointed and very desperate. I returned sadly to the waiting location and we could not sleep all night. At about ten o’clock in the morning we heard shocking news that part of the boat was burned and many people lost their lives and the rest of the survivors were returned to a port by a fisherman, and now many of them are in a hospital affected by the fire. The rest of the people came back to our site and said that the total of the survivors were 49 people, and they were more than 110 people on board, which means the missing were more than the survivors. The number of missing persons is 60 people or more, who went missing because of the fire. The reason for the disaster is because the captain of the boat used a lighter to see the engine, and the fuel went on fire. He and everyone sitting next to a captain and a part of them went into the water due to a burning fire and could not return to a boat because they did not have the necessary safety means. The Libyan fishermen rescued them, but they did not search for the missing people.

The wooden boat was on two levels. That captain made a mistake, how does one think of using a lighter in order to see the gasoline? At the time when the fire was set off from the engine, all those who were sitting by the engine went down in the water, as a fire started with the very flammable gasoline. And those who were in the upper level did not go down, but pulled off their clothes, and the fire was put off. We were rescued by the fishermen, but the police were nearby them and took them to prison and they were later released.

I was in direct contact with Alarm Phone from the boat. There were more than 100 people on the boat, and we lost at least 50 people. There was a fire and many people jumped into the water. I also jumped into the water, and I survived because I managed to swim back to the boat afterwards. We called the Italian authorities at least 20 times. Last time we asked them for the number of the Libyan Coastguard, but they refused to give it to us. I want to give you my detailed testimony.

(We promised we would call back but unfortunately the number was not registered).

At 02.30h CET on 18 March 2021, a grey wooden boat with more than 100 people on board called Alarm Phone. The people on the phone were in panic, as their engine was on fire. They said they had left from Zuwara just a couple of hours earlier, and as they were calling from their mobile phones, the boat seemed to be very close to the Libyan shore.

We immediately tried to call the so-called Libyan coastguard, to mobilise quick intervention and rescue of the people in distress. As usual, nobody answered. We then immediately called both MRCC Rome and RCC Malta to inform them of the events and to ask their cooperation in ensuring a quick rescue. But both these authorities interrupted the calls and our later calls were not answered.

At 03:32h, we sent an email to the so-called Libyan Coastguard, MRCC Rome and MRCC Malta, informing them of the distress case. Unfortunately, at the time, we could not relay a GPS position of the people in distress as they were in such great panic that obtaining such information was not possible. However, we kept in contact with the people in distress, and following their request, we sent them the phone number of the Italian MRCC, which they said they tried to call several times but in vain.

At 04:57h, Alarm Phone finally managed to receive a GPS position of the people in distress (N33°35, E12°12, showing them in international waters, 50 nautical miles north-east of Zuwara. The people reported to us that 50 people had died due to a fire on board. We immediately forwarded the GPS position to all authorities and to Ocean Viking, who launched a search operation, moving toward the indicated position. Unfortunately, the boat was not found as the position shared by the people in distress was incorrect. When people are in severe distress, and communication is difficult, sharing their position by reading out the numbers aloud often leads to mistaken positions.

In the meanwhile, the so-called Libyan Coastguard GACS patrol vessel P-301 demanded the assistance of the Ocean Viking for rescuing 10 people in distress on a fiberglass boat , which were safely taken on board the Ocean Viking at 07:53h (in position N33.325°, E012.136°)

It is only at 08:00h that we managed to reach the people in distress again, and to receive a new GPS position that seemed to match their departure time. The new position 33°07  12°20 (08.10h) showed the boat just a few nautical miles from the coast, in the area between international waters and Libyan national waters.

According to Ocean Viking’s logbook the so-called Libyan Coastguard GACS patrol vessel P-301 had informed Ocean Viking that they would be heading towards the reported position. Ocean Viking followed, ready to provide assistance.

At 08.50h, the Frontex air surveillance aircraft Osprey1 could be tracked searching for the boat in distress around the position reported by Alarm Phone. 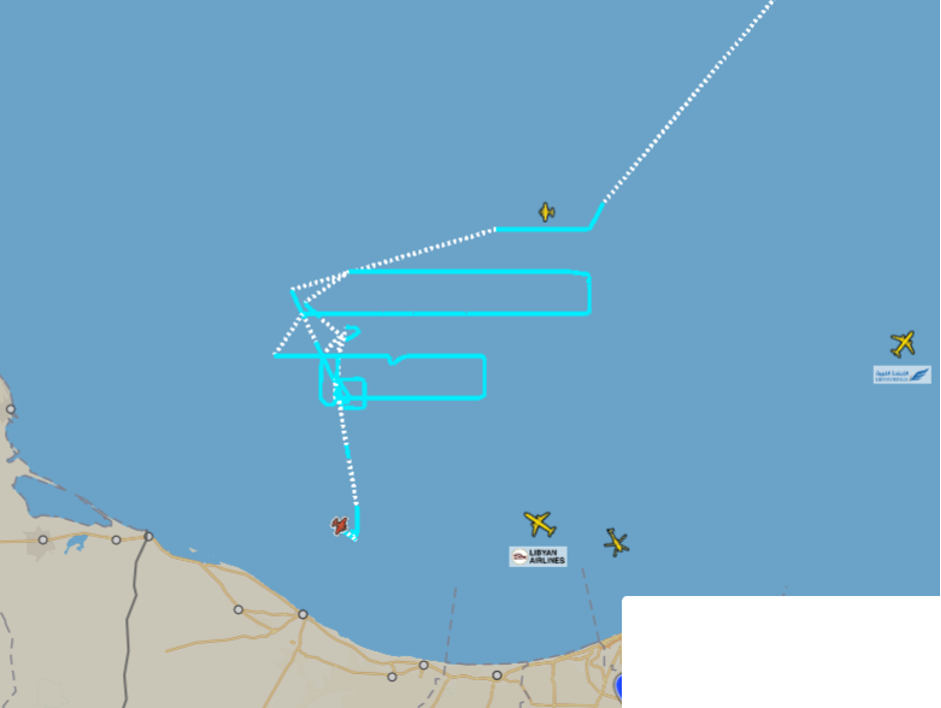 Photo: Screenshot of Osprey track at 08.50 CET.
Alarm Phone requested further information on that search mission from FRONTEX – no answer so far.

At 09:12h, according to the Ocean Viking logbook, both the Libyan Coastguard patrol vessel P-301 and Sea-Watch’s Seabird airplane, reported that the boat could not be found  in the last position  reported by Alarm Phone. Ocean Viking was then instructed to stop moving towards Libyan national waters and to head north, in a communication by the so-called Libyan coastguard patrol vessel 658.

At 10:03h, we managed to re-establish contact with the people in distress, but there was a lot of shouting and screaming in the background and the call got interrupted.