“I will never forgive this world!”

Maria died on an islet in the Evros river. Maria was only 5 years old. She died as a consequence of the brutalisation along the Turkish-Greek land border. 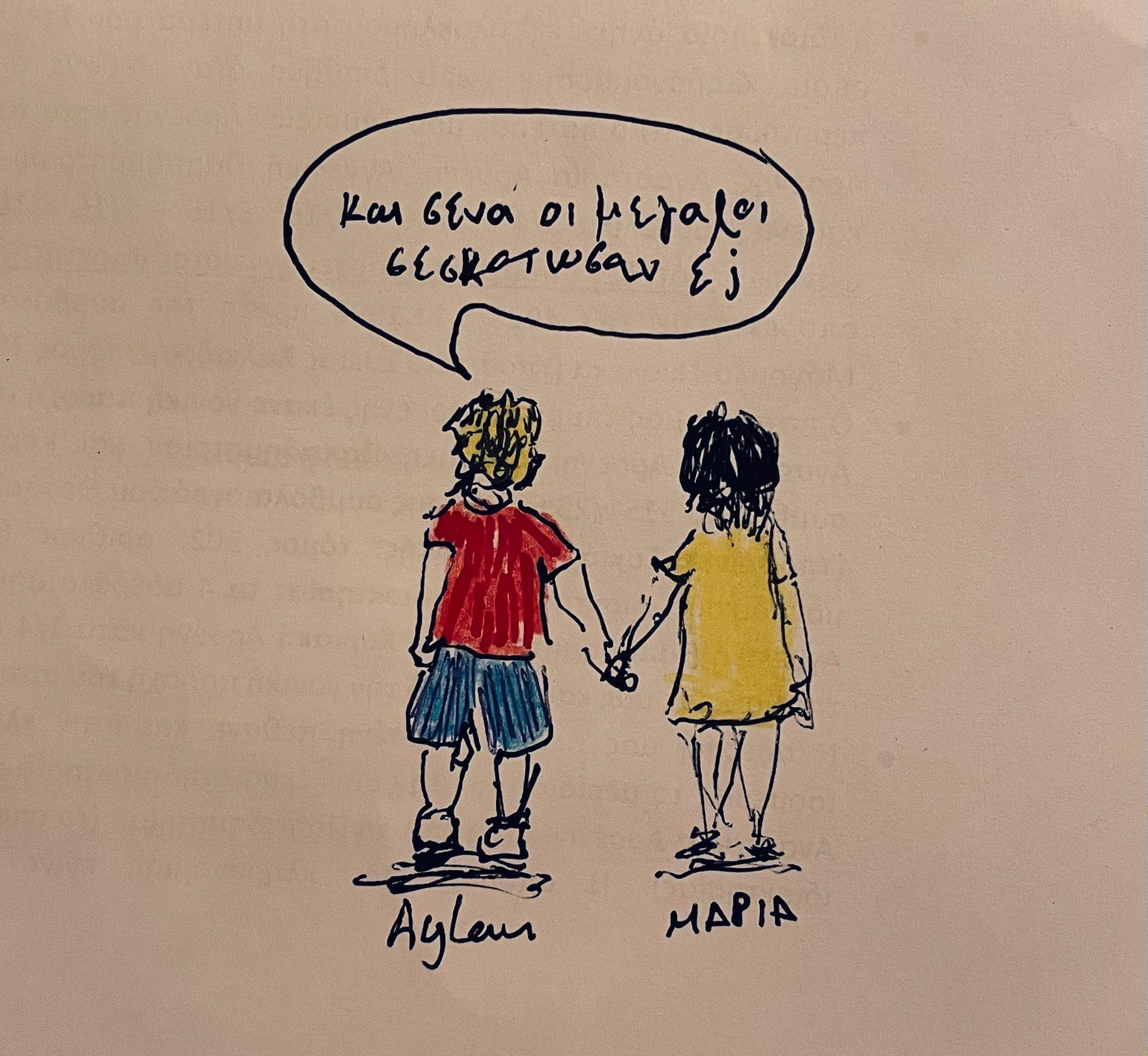 “So the adults killed you too, right?”, August/September 2022. Drawing: Anonymous.

On 9 August 2022, Maria died on an islet in the Evros river. She was only 5 years old. Over the last 3 weeks of her life, she was exposed to an ongoing war against migrants along the Turkish-Greek land border.

The group Maria was part of had fled to Turkey from the war in Syria. They tried to find a safe place somewhere in Europe after Turkey started threatening Syrians with deportation. Already on 14 July, they were confronted for the first time with the deadly consequences of this ongoing war against migrants at Europe’s borders. When the group was pushed back by Greek border guards, they experienced extreme violence. One Syrian refugee died on the Greek bank of the Evros River after a violent seizure by the Greek police. Two others died tragically by drowning when they fell off the boat into the river during their pushback by the Greek authorities.

The people were in shock. They publicly announced the death of their fellow travellers. The group first contacted us in the afternoon of 5 August. They sent us dozens of pictures showing signs of beatings on the bodies of all young men in their group. Baida A., 28-year-old from Syria reported constantly to the world, desperately crying out for help:

They reported that they had contacted the European Court of Human Rights (ECtHR) with the help of a lawyer of the Greek Refugee Council who did their best to support them. After assessing the case, the court granted interim measures. The decision stated that the Greek state must carry out a search and rescue operation, as well as provide medical assistance, access to Greek territory and food and water. The decision of the ECtHR was already from 20 July, so that, when Alarm Phone was contacted, it was obvious that the Greek authorities had ignored it.

A day after the first contact, on 6 August, the group reached out again:

“My grandmother is crying and saying let me just die here. The pregnant woman here in the 8th month suffers from contractions and we don’t know what to do. We are hungry and sick and insects have eaten our bodies. I don’t really know what to do. I’m sad.  Why does no one want us? What is our fault, my friend, only because we are Syrians, we are rejected by everyone. Turkey deports us, and Greece beats us, deports us and is throwing us onto the islands. Our situation is miserable here. The situation here is tragic.”

They had become direct witnesses of a crime carried out by Greek authorities who then tried to get rid of the witnesses by all means. It felt like a nightmare without an end.

The group of travellers close to the Greek-Turkish border by the Evros River, August 2022. Photo taken by one of the travellers.

On Monday during the late evening, the 5-year-old Maria and her 9-year-old sister were stung by scorpions after remaining without assistance for more than two weeks, following the ECtHR decision. Maria died. The sister remained for days in a very critical condition. Baida reported:

“The two sisters were stung by a scorpion last night while they slept in the open, and the little Maria suffered a lot before she died from the effect of poison. The other sister is still trying to hold on to life and try to survive, but how do you help to survive a girl who leaks poison to her body, and there is no doctor here? There is nothing I can help her with, no party has helped us so far and we have 4 dead and death is still chasing us in this hell. Please help us for the sake of humanity. I will never forgive this world. I can’t bear to lose another person another small person. She is struggling with death without me being able to do anything. The girl’s family was shocked and I am afraid of the complications of this trauma that they have. Do you know the feeling of a father and mother when they lose a child, their feeling and their other child is fighting death in front of them?”

Until Thursday night, the police claimed that they could not locate the group, even though they had been informed of their geographical location again and again. And while the position of the refugees did not change, on Thursday night, the Hellenic Police suddenly announced that they had located the group. But they claimed that the group was not on Greek territory, without mentioning exactly where they were. After several days, we lost contact to the group, but we finally learned on Monday, 15 August, that they succeeded in crossing the river to Greece. After that and probably also due to the huge public attention the situation received, the Greek authorities confirmed that they had “found” them.

There were many people and networks involved, some much longer than we were. The Greek Refugee Council and HumanRights360 had appealed for the interim measures. Journalists were reporting on the case non-stop. Especially remarkable is the documentation of Eph.Syn, a Greek newspaper that reported on the situation constantly. Greek doctors called on the government to allow them to treat the injured and sick. There were petitions made and members of parliament intervened. It was only through this solidarity that the Greek authorities finally gave in. But, first and foremost, it was the people themselves who in a last desperate move managed to take a dinghy to cross the river. The dinghy had been used by other travellers.

Once they arrived, they immediately informed the world and called for rescue, once more. It was too late to save Marias life. Baida wrote: “I will never forgive this world!”

Death along the European borders is nothing new for us. Over the last 8 years, the Alarm Phone has always closely witnessed how people drowned or disappeared. Again and again, we face the same left-to-die-policy. We started the Alarm Phone saying: “We don’t want to count the dead along the borders. We want to intervene to prevent them.” 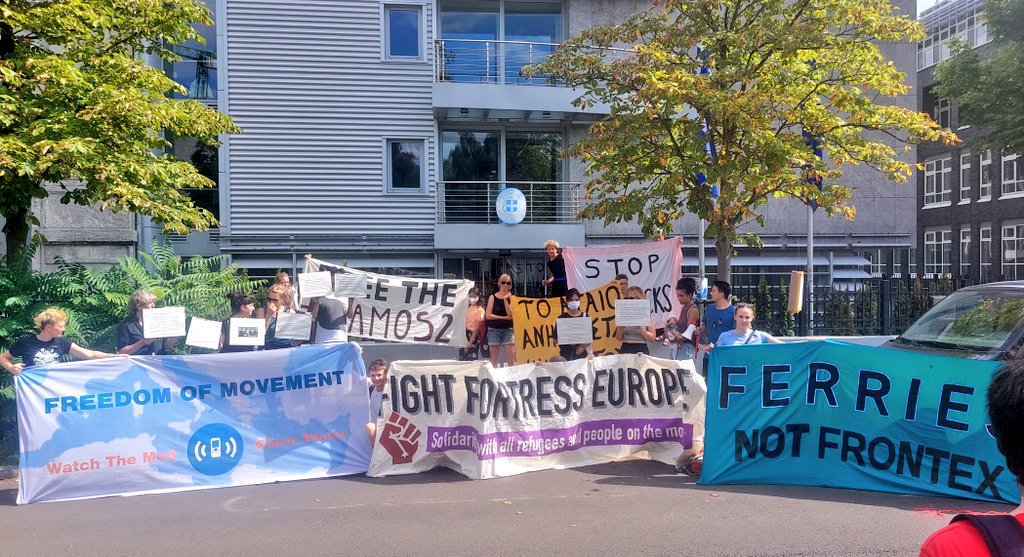 A protest action in front of the Greek embassy in Berlin in response to Maria’s death at the Turkish-Greek land border, August 2022. Photo: Alarm Phone

The methods used by Greek and Turkish border guards in this war on migration have become even crueller. In March 2020 when the situation started to reach this new level of escalation, Ursula van der Leyen, the president of the European Commission thanked Greece for being Europe’s shield. Maria died as a consequence of this logic.