“Can you imagine how all of this violence affected my daughters?” 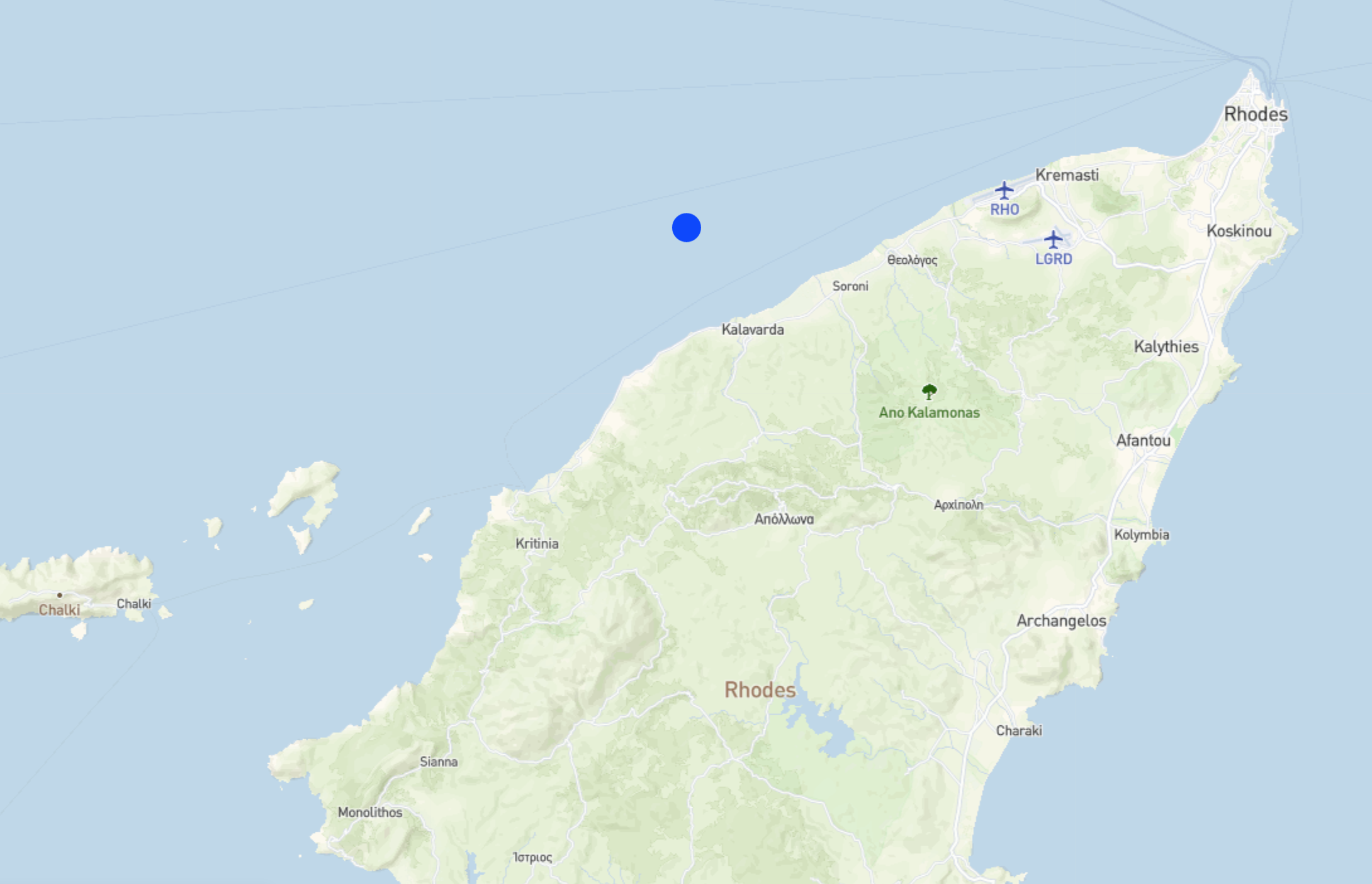 Position of boat in the morning of 19 September. Photo: Alarm Phone

In the morning of 19 September, we were alerted by relatives to a boat in distress North of Rhodes in Greek waters. We could not establish direct contact to the travellers, but still we alerted the Hellenic Coast Guard. Around 12:15h CEST, the relatives told us that the Hellenic Coast Guard came, but took the people to a small, uninhabited islet and robbed them. They reported beatings and that all belongings were violently robbed from them. They could manage to hide one phone, but all others were stolen. They were finally pushed back onto the sea and left adrift.

Days later we managed to talk with one of the survivors, a Palestinian single mother who had lived in the Alsham refugee camp in Syria for years. We want to share her testimony here:

“I am a Palestinian from the refugee Alsham camp in Syria. My dream was to guarantee a safe life for my daughters and to give them a homeland, because as a Palestinian I do not have a homeland. My husband died in Syria, when I was pregnant with my daughter in the third month.

This was the sixth attempt in which I have been pushed back with the same extreme violence. I was afraid this time that soon the light will come out. I was afraid of being late because with daylight there will be much more risk of the presence of the Greek Coast Guard.

When we boarded the rubber boat, I was surprised by the huge number of people – about 35 in a small boat. The captain of the boat did not understand anything about the GPS. We spent about 3 hours at sea and after several attempts we arrived near Rhodes. And quickly the Greek guards arrived.

There was a boat in which 6 men directly threatened us with weapons, they dismantled the engine, they took the gasoline. They kept threatening us with weapons, and told us if we move, they will shoot and kill us. They were dressed in black uniforms and there were two hooded persons. I really do not remember the details of the boat, because I was terrified and afraid for my daughters. They took the engine and gasoline and left us in the water in the rubber boat from five in the morning until about 11.30.

Then another Greek patrol boat came. It was orange and grey, not all were masked but all dressed in black. There was a person wearing a white shirt among them. I can’t remember more details because I was terrified and looking after of my daughters and trying to calm them in this terrific situation.

I could hide the phone and they took us far away until they reached a rocky island. I tried to call Alarm Phone and sent the location via WhatsApp and I sent my position, which referred to the island, while we were on the boat at sea. We were beaten, insulted and threatened with weapons during all this time and refused to tell us where they will take us or to give water to the children. Then a big grey warship came. They took us on it. The “commandos” were all in military clothes. They also took the rubber boat in which we started traveling. There was another rubber boat attached to the warship. They took us very violently. They threw us from the boat to the warship. They violently took the children. They had an electronic inspection machine and took all the phones and everything that was with us. I could not hide anything, except a Turkish SIM card, and another very young girl could hide a phone in the warship before getting inspected.

They beat us with sticks and threatened us with weapons on a continuous basis. They refused to give us water for the children or something to eat. Even the children were severely beaten with sticks and they took off the veils of women in very violently way, but at end we managed to keep the phone hidden by big teamwork. We were always asking where they will take us, but the only answer was beating us.

On that day we knew that there was a strong storm. At about two o’clock in the morning we were following the weather news before the start of the journey and we were alerted about the storm. The commandos were moving away from land.

Everything was forbidden: to eat, to ask for water – if you spoke you got beaten. Also it was very cold so we asked for blankets for the children. They refused and beat us. At two o’clock in the morning the storm and the high wave started.

The children were asleep, and suddenly the commandos woke up everyone – even the children – by beating, and they threw one by one into our inflatable boat from the high barge. We were about 67 people in the 2 boats, which were in bad condition due to the salt and from throwing people from high distance into it. They divided the people between the two boats – one boat for families and another one for the youth. There was a young man who helped me with my daughters because I was completely exhausted. We tried to communicate with them, because in the storm this is an inevitable death, but they refused.

We took the phone and sim-card and called the Turkish Coast Guard, which came quickly due to the seriousness of the situation. We were also terrified of the situation because there was a group of young people not present in the two boats. They were missing.

The Turkish guards took us to their centre, and then brought us to another police station, where we found the friends who were missing. They said they were thrown into a rubber boat and lost without a phone for one day until the Turkish Coast Guard found them.

On the third day, they released us. But the Turkish police took my tourist residence card, and now in order to settle my situation, I have to go to a remote centre far from Istanbul for 14 hours, which is impossible in my situation.

My daughters are in a very difficult psychological situation. There is nothing to do for them, not even the possibility of going to school. Their psychological situation has deteriorated since the third attempt where we got violently pushed back and we were thrown into a boat where the water was entering and we miraculously survived.