“Although we said to the Greek police that 'if you push us back, we will be arrested in Turkey', they sent us back […], violating the international ban on refoulment.”

E. asked the Alarm Phone to share a personal account of one of the pushbacks they experienced at the Greek-Turkish border – one of many human rights violations committed daily at the borders of Europe.

“My name is E. Because I live in Turkey, I cannot disclose my identity. I am a citizen of Turkey. I was taken into custody on charges of terrorism against the dissidents of the Erdoğan regime while I was doing my master’s degree and also teaching in Turkey, and I have been under investigation for six years. My husband is a chemical engineer and took refuge in Germany four years ago. My two young sons went to Germany a year ago to live with their father and study there. Since my ban abroad was not lifted despite all my applications, I took the risk of passing the Maritsa* River in order to reunite with my family in Germany in May 2022. After a long and difficult journey, I sought asylum in Greece. I explaining my situation to the police officer I encountered, but he handed me and two other Turkish citizens taking refuge with me over to unidentified people with face masks, without even taking us to the police station. We were put in a vehicle that would not allow a person to breathe along with 15-20 Afghan refugees and given a boat. It was at that moment we realized that we would be sent back. We were brought to the border, our phones were taken away and thrown into the river, and we crossed the river with more people than a boat could take. So, we were pushed back to Turkey. Although we said to the Greek police that ‘if you push us back, we will be arrested in Turkey’, they sent us back with a group of 15-20 Afghan refugees, violating the international ban on refoulment. Unfortunately, we were detained in Turkey. I was in custody for one night. The two teachers next to me were arrested and sent to prison. They will remain in prison as political prisoners for the next six years. I lost my only hope to go to my two sons who are waiting for me.

I would like to thank you in advance for your sensitivity regarding the pushbacks on the Turkey-Greece border and helping our voice heard regarding this crucial issue.”

E. is one of many people who are trying to find safety in Europe, to reunite with their loved ones or to find a more peaceful life, and whose hopes and dreams are being crushed time and time again by the violent border guards of Fortress Europe. We will continue denouncing such violations of human rights and we will continue to stand in solidarity with E. and all people on the move – For the right to freedom of movement! 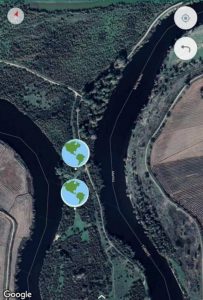 Screenshot sent by E. displaying their positions on the Greek bank of Maritsa/Evros river. 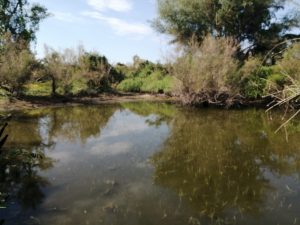 Photo of the surroundings taken by E. while they were on the Greek side of Maritsa/Evros river.