26 lives stuck on a container vessel need immediate disembarkation in closest port in Malta or Italy! 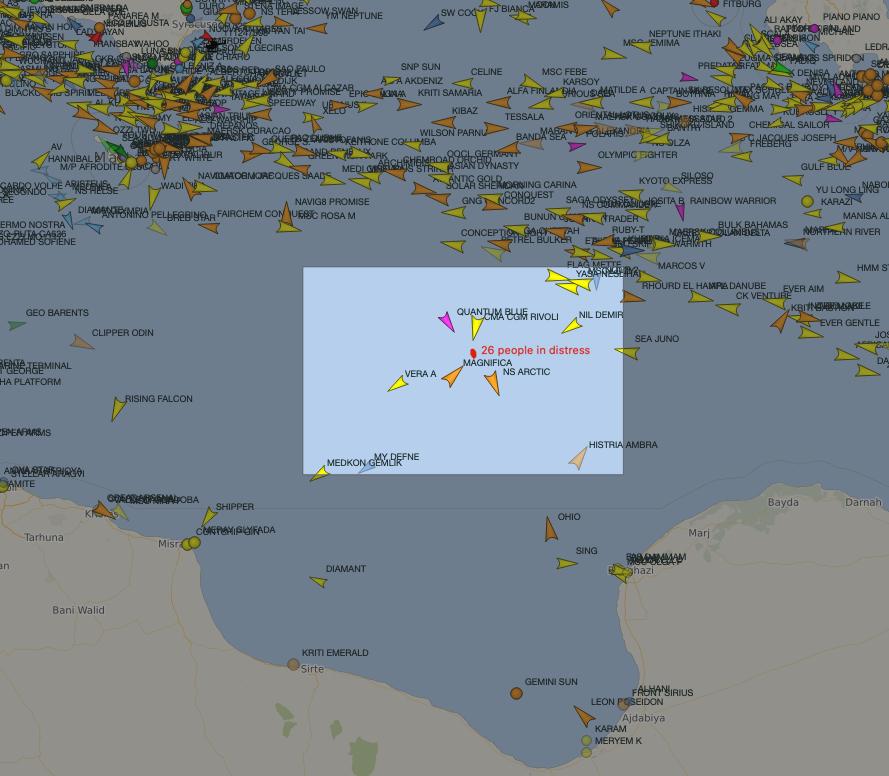 6 March 2022 – Vessels in the vicinity of the 26 people in distress in international waters. Source: vesselfinder.com

In the evening of March 5th, the Alarm Phone was alerted by a relative about 26 people on a rubber boat in distress in international waters. The boat departed from Benghazi on the 3rd of March. As no state actor reacted to our alert and the NGO-vessel Geo Barents was too far away to reach the people in distress on time, Alarm Phone started contacting several merchant vessels in the area, as to prevent a possible tragic shipwreck. We asked MRCC Rome and RCC Malta to alert vessels in the vicinity, but both Italy and Malta refused responsibility. Instead, they told us to call the so-called Libyan Coastguard.

Since 6th March, at 11:29 CET, we lost contact to the people in distress. For some hours we and relatives feared the worst, as authorities did not give info. Only at 13:30 CET we got informed about the rescue of the 26 people, conducted by the container vessel CMA CGM Rivoli. We thank the captain and the crew for their immediate intervention! Italy and Malta not only refused to coordinate rescue, but they now also refuse disembarkation in their ports.

The 26 people who fled Libya are now again stranded since more than 48 hours on a container vessel heading to Dunkerque, France, despite Italy or Malta being the closest port of safety in Europe!

Again, Italy and Malta are enacting punitive tactics against vessels that fulfil international and maritime law by refusing to abandon people at sea. These tactics are meant to discourage any type of rescue at sea, and have the direct effects of facilitating both pushbacks to Libya and shipwrecks.

We demand an end to these punitive tactics against solidarity at sea, be it amongst migrants, by the civil fleet or by commercial actors and merchant vessels. We demand the immediate assignation of a close port of safety in Europe.

22:10 CET Alarm Phone gets alerted about a boat in distress by a relative who passes the phone number of the people on board and other details.

00:55 CET We send an mail to MRCC ROME, RCC Malta, the so-called Libyan Coastguard and several actors of the civil fleet.

02:12 No state actor replied to our distress alert. Only the NGO-vessel Geo Barents replies saying they are heading towards the last known position, but will only arrive about 24 hours later.

03:30 Alarm Phone updates all actors with the new position, but again, only Geo Barents replies to the alert.

07:59 MRCC Rome sends a Navtex to all vessels in the area.

08:01 We call MRCC Rome. They confirm they have received our email. Alarm Phone asks to contact the merchant vessels in the vicinity to coordinate a rescue. The officer refuses to be the competent SAR authority.

10:15 We call the people in distress and ask for an updated GPS position. They reply: ‘same like all – our boat is not working, it was damaged’. The people sound like they are in distress, with shouting in the background. The line scrambles. The call cuts.

11:02 There is a last contact with the people in distress, when they say that they see a container vessel with the letters CGM.

13:30 We receive an email from CMA CGA, North Group about the rescue of 26 people in distress by the container vessel CMA CGM RIVOLI.