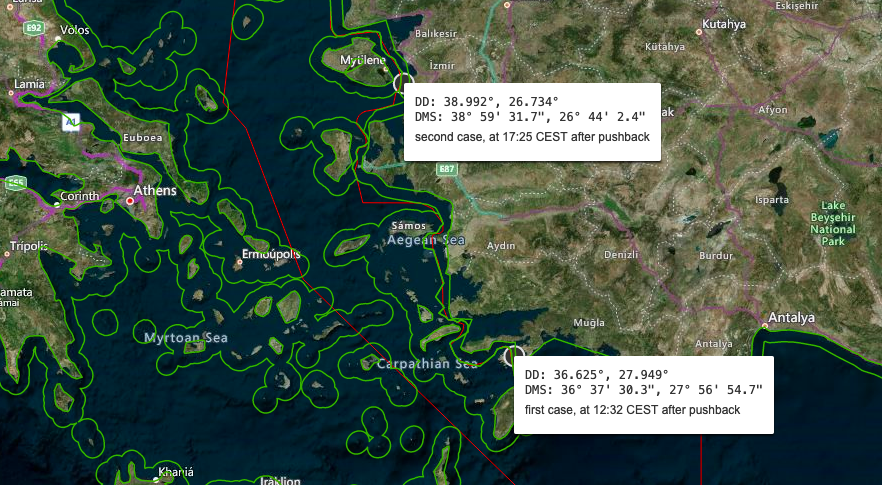 The locations of the two cases. Photo: Alarm Phone

On 8 October 2021, Alarm Phone was alerted to two different cases of distress in the Aegean Sea. In both cases, the people ended up drifting in Turkish waters after they had been pushed back. The first group was taken on board of a vessel of the Hellenic Coast Guard near the island of Simi / Rhodos who, after having returned the group to Turkish waters, forced them into life-rafts. The second group reported an attack by Hellenic Coast Guard: First, their engine was removed south of Lesvos, then they were towed into Turkish waters and left adrift at sea. In both situations the people reported that they were first met by military-like vessels belonging to European countries other than Greece.

This implies that we have possibly witnessed the concrete cooperation between Frontex and Hellnic Coastguard coastguards in carrying out illegal pushbacks in two different locations in the same day. The information available to us strongly suggests that vessels belonging to the EU’s Frontext mission detected the boats in difficulties. But instead of rescuing the travellers to the nearest safe port, they just observed the scene until the Hellenic Coast Guard arrived and illegally pushed the people back into Turkish waters.

We want to know:

Around 12:00 CEST our team was alerted by a relative about a group of 12 people including 4 women, 5 men and 3 children, refugees from Syria, Iraq and Palestine. Shortly after the alert we were able to get in contact with them. We received a GPS-location near Simi (36.6250710, 27.9485340 at 12:32 CEST). The people were drifting in life-rafts in Turkish waters. This happened after being pushed back by a vessel of the Hellenic Coast Guard from Greek waters. When the travellers contacted us, they were in a state of panic. Therefore, we alerted the Turkish coastguard who took them back to Turkey. Around 14:55 CEST we received confirmation that the people had been rescued.

“We are from Syria and on 8 October we were on our way to Greece. In the middle of the sea we saw a military ship. It was not too big, but also not small and it had a flag of the European Union and also another flag I cannot remember. The men on this ship had dark uniforms. They were watching us until the Greek coastguard came, then they left. The Greeks took us on board of their ship. Then they destroyed our boat. Then they started driving around with us. They did not go directly back towards Turkey, they were driving around a bit before. After a while they first took all women and children they put us on one thing like boat [she does not find the word for life-raft] and then put this “boat” to the sea. The men they also took them and put them on another one, which was damaged and water was entering. Then they left us there and went back. We were full of fear and some people panicking. I had fear that we would all drown now, that we would die. We started then calling for help. We called the Turkish coastguard and we called also different NGOs. Finally the Turkish coastguard came and rescued us. We had to stay for 2 days in quarantine and then we were free again. Since then I tried to go two more times – because I have to find a place of safety.”

From the witness’ testimony the first vessel on the spot could belong to the Nato or Frontex mission in this area. We demand answers as to who was on spot and did not prevent this illegal push-back.

A few hours later at 17:14 CEST on the 8 October our shift team was informed about a boat carrying 22 passengers including 6 women, 14 men and 3 children. They tried to reach the South of Lesvos. Later on it turned out they were 25 people on board. The boat was drifting in Turkish waters, after having been attacked, their engine removed, and towed with a rope to Turkish waters in an illegal push back by the Hellenic Coast Guard. They were left adrift in Turkish waters. They passed us their GPS-location (38.9921335,26.7340097) at 17:25 CEST. At the time, the boat was drifting South of Bademli. Our shift team alerted the Turkish coastguard who reported that they detected the boat and started a rescue operation at 18:16 CEST. 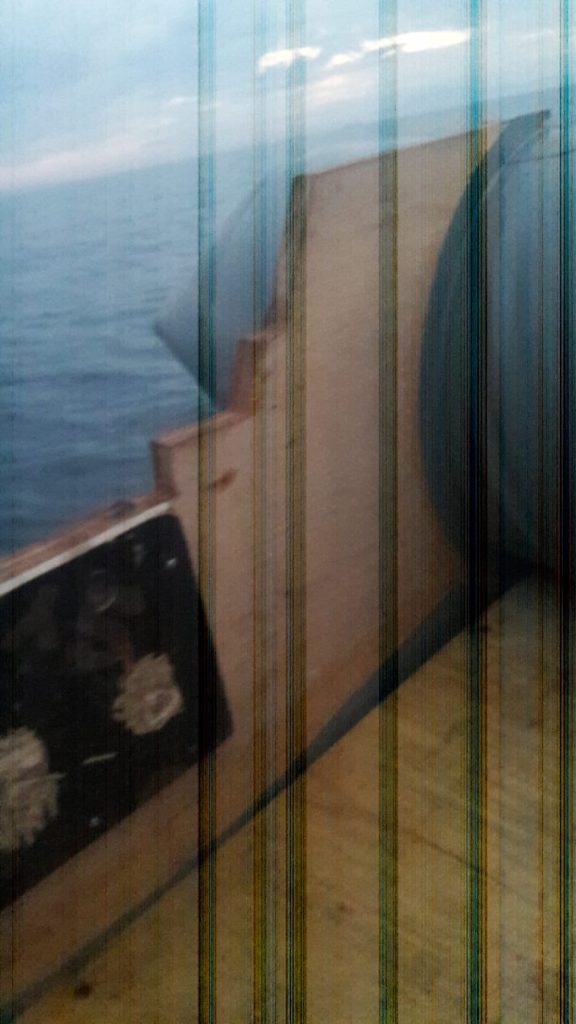 The engine of their boat was removed. Photo: Anonymous

Days later we managed to get back in touch with the people from this boat. Testimony by one of the persons on board:

“On 8 of October we were on a boat trying to go from Greece to Turkey. We are refugees from Palestine and the Gaza Strip. We are trying to flee from hunger, siege and Israeli occupation and no one helps us. With us on the boat there were also refugees from Syria. All together 25 people, among us 9 women and 4 children. We were on our way to the island of Lesvos, to try to find a place of safety in Europe.

We saw a white boat in front of us. It was an Italian ship, I think. Someone made pictures, so you can see it. This white ship did not help us. They were standing in a distance from us and stayed there without helping us. We called by ourselves the Greek coastguard. When the Greek coastguard came this white ship went away from us in the direction of Greece. The Greek Coastguard approached us with a grey rubber boat. There were 3 men with masks on the rubber boat and others we did not see. They were armed. They asked us to remain silent. They cut off the ship’s motor and ordered us again to shut up, and then they came to pull the boat. We were dragged with a rope towards Turkey. Then they left us there.

We contacted the Turkish coastguard, so that they would come to take us and also some groups to help us. Then we waited for about an hour and a half at sea before the Turks came.

My friends were beaten and had their luggage and phones stolen in the past – you want changes, but nothing changes these days. Our people of Palestine suffer from all kinds of oppression and injustice in our country. So we need to immigrate. Hope the future will be better. We hope that in the coming days, immigration will be more easy.”

By comparing photographs we could figure out that the white vessel the witness describes is the CP420, a vessel belonging to Guardia Costiera and part of the Frontex mission.

This shows once more the close cooperation between Frontex and the Hellenic Coast Guard in these brutal and illegal pushback practices. The responsible actors must be held accountable!

Other reports on these cases/Background research

Aegean Boat Report reported that case, including photos send from the boat before it got attacked and pushed back
Turkish Coastguard reports the case in their News section and in Turkish Coastguard Statistics
We summarized the case on watchthemed.net