70 People in a Shipwreck close to Crete - one Person died

This solidarity statement by ROSA NERA Squat & Chania Social Center / Migrants’ Club, has been published in support with and in reference to a situation of non-assistance off the coast of Crete on 20 November 2021. Also the Alarm Phone was alerted to this case and stands in solidarity with the affected and local activists. Find a detailed overview about the developments here. 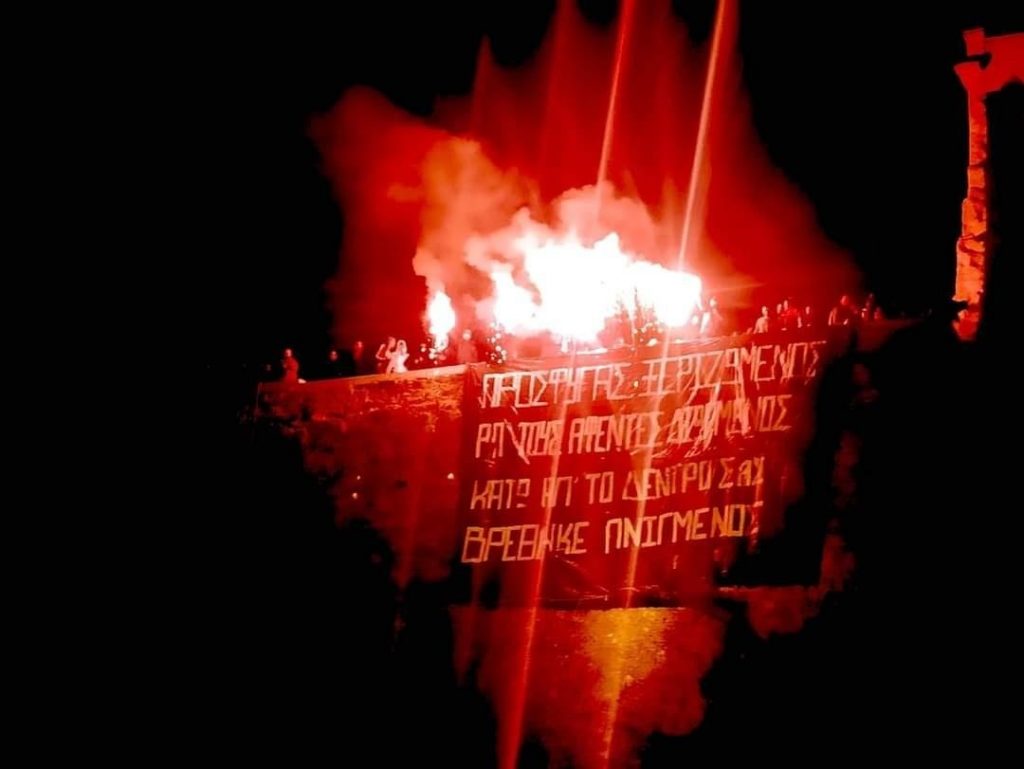 It is a fact that refugees and immigrants no longer choose Greece as a destination, not even as a station for their difficult journey to Europe. Ongoing complaints from NGOs, organizations, members of European Parliament and human rights committees, as well as the plethora of testimonies of people claiming to have been illegally deported, tortured or prevented from applying for asylum, outline the borders and the whole country as a grey area, a vast prison where the war on immigration and refugee life is intensifying. However, we happen to live in an area that is often a place of “forced arrival” of refugees due to the danger that usually arises at sea. There is a popular route that starts from the coast of Turkey, crosses the Eastern Aegean, passes south of Crete to reach Calabria, Italy. This is the route of Calabria (calabrian route). It is a rule that this trip is made with non-navigable boats and rafts, a.k.a. tubs. Most of the time the luck of this trip is to “take water, start sinking and send SOS, many times somewhere near Crete. This is exactly what happened with the last shipwreck, when 70 refugees, following the above route, were found to be in danger in the sea close to the island.

But let us ask ourselves what really happened, how the issue was presented by the media, what emerged and what was silenced once again. The media said: “After an immediate rescue operation by the Hellenic Coast Guard, it was found that one of the passengers was dead.”In fact, the tub that transported the victims seemed to have a problem as early as Friday 19/11. Relatives of the refugees complain that they were informed by their family that on Saturday, 20/11, the boat stopped operating. From Saturday morning, passengers and their relatives were constantly calling the Greek Coast Guard and the emergency number, but the Coast Guard appeared at the spot late on Sunday, 21/11, once again showing criminal delay and attitude. According to anonymous complaints from the passengers, the boat of the Hellenic Coast Guard, reaching the spot, hit the already half-sunken boat several times, resulting in spreading panic, the mutilation of two people and the death of a 33-year-old Syrian refugee, father of 3 minor children. One of the blows has as result 10 people find themsleves dropped in the water, among them the dead man and the injured. The 4 managed to get back on the boat. The other 6 stayed in the water for about an hour, while the Coast Guard had already begun to transport to its boat the people who were in the refugee’s boat, indifferent to those who were at the sea. The refugees speculate that the deceased suffered a heart attack, as while floating for an hour, his gaze was lost and he sank. they are then transferred to the boat of the Coast Guard.

The media wrote: “In Paleochora, the authorities are already making preparations, with all the protocols followed in these cases, for the protection of public health, while the people who were aboard the ship are expected to be quarantined”. In fact, in these situations that you no longer call extraordinary, the only preparation of the authorities is the coordination of volunteers and offers that have no cost to the respective Municipality that “undertakes” the “hospitality”. And the truth is that this time the solidarity, the institutions and the associations that actually undertook the accommodation and the nutrition of these people, very simply they were the ones who actually undertook the reception of the shipwrecks. At the same time they denounce that the place of hospitality (parish centre “Agia Sofia” Kountouras), it is not suitable for temporary residence, and that their forces and resources are limited and they can not respond if the State does not contribute. Of course, what happens with the protocols concerning the internationally guaranteed rights of refugees does not concern the controlled – directed press at all. While the right to asylum is a basic human right and the 1951 Refugee Convention, EU law and the European Convention on Human Rights stipulates the obligation of states to protect the right to seek asylum, even if one enters illegally, once again the refugees found in Kountoura were not informed for their rights, no one ever translated them the “formal administrative documents” that were served on them and the police said NO to the choice of asylum, at a time when everyone wants to apply for asylum! In fact, from the first moment of their detention, their mobile phones were removed!

On Saturday, November 27, without any notice even to the supporters and volunteers, suddenly, as always, the police transported the people to the port of Souda and from there to Amygdaleza, Athens. After the interventions of solidarity collectives and organizations, the unaccompanied children are waiting to find out in which structure / hostel for minors they will be transferred and thus they escaped a prolonged detention, without any care regime, as happened with boats that arrived in the same way on the island. It should be noted that on Thursday, December 9 in the Venetian port of the city, an event was held for the lighting of the Christmas tree of the Municipality of Chania, which this year was procured from Paris and cost the scandalous amount of 30,000 euros!!! A tree costs tens of thousands of euros, a human life nothing. A tree travels safely, while a refugee is in danger at every step. Detention for those who committed the crime of human movement and a reception ceremony for a tree, plus the expenses of the concert, plus the expenses for lighting, plus plus, plus… At the same time that such amounts are spent, the Municipality is unable -as it claims- to take measures for the homeless in the city and in the request to offer clothes from his well-publicized wardrobe for the treated refugees, it sent three regardless of the size which was asked for, pants and two perforated shoes.

To defend the freedom of movement and the protection of refugees.

To defend the duty to rescue at sea, to stop the crimes against immigration!

To smash the fascists and the scum in ties or uniforms! Those who exterminate lives of people seeking asylum must be called out by the society and account for their actions!