14 people dead after more than two weeks at sea

During the early morning hours of 28 July 2021, the Alarm Phone was alerted to a boat with 46 people in distress on the way from Dakhla, Western Sahara, to the Canary Islands. As the people were already out of sight of any phone mast when we received the alert, they had no reception so we were never able to establish contact to the people on board during the journey. Thanks to conversations with survivors of the trip and family members, we were able to get a better picture of what happened at sea.

Having left at around 6am on 28 July on a journey of about 450km across open sea to the Canaries, the weather conditions proved to be very difficult from the off. Strong winds of around 25 km/h blowing towards the Southwest, with gusts up to 35km/h, pushed the boat away from their destination.

Historical wind data visualization from the 8 August 2021 of the region around Dakhla and the Canary Islands. Source: Ventusky.

After three days, already lost,  the group found themselves adrift without any petrol, food or water. They would have to endure this horrific situation for the next 11 days. Many people in the group perished, because of the hostile conditions. A relative of one survivor told us what she learned:

They ran out of food and water, the guys had no cigarettes. Some guys started to jump into the water, they preferred to die than stay onboard. Other people died during the voyage and their bodies were thrown to the Ocean, even though some passengers asked to keep them onboard because their families would like to see them.

She also gave further details of how family members of hers survived by eating raisins and drinking sea water. One of them got completely burnt by the sun during the trip as she was protecting the others from sun and winds. Nine people lost their lives during the two weeks the group was on its own, exposed to the dangers of the sea.

Unfortunately, this is not an exception. The Atlantic route continues to be the most dangerous and deadly route to Europe. In cases reported to the Alarm Phone between 1 and 20 August, there was  47% mortality rate. The incredibly long trips along this route can last from several days to weeks and put travelers in very precarious conditions. These include no phone coverage or other means of communications, little to no food and water, not enough fuel, strong currents, winds and other adverse weather conditions.

On 10 August, the boat was spotted by one of the planes of Salvamento Marítimo, around 200km of the coast, having drifted off to about 650km South of the Canary Islands. As the article states, a rescue operation had been launched but then aborted, as a previous SAR plane sent out to find the boat had returned without success. 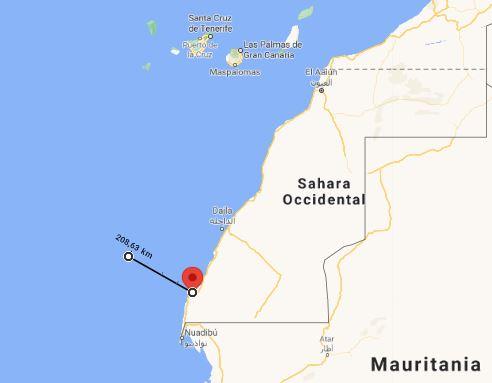 Visualization of the reported position where the boat was spotted, 200km off the coast of Western Sahara. Source: https://maps.google.com

Due to the long time it would have taken a rescue vessel to reach the boat, Salvamento Marítimo contacted two merchant vessels in the vicinity: The Ever Grace and the Fortaleza Knutsen. Following the tracks of the two ships on vesselfinder.com we could see that some time after the alert the Ever Grace altered their route in direction of the reported position: 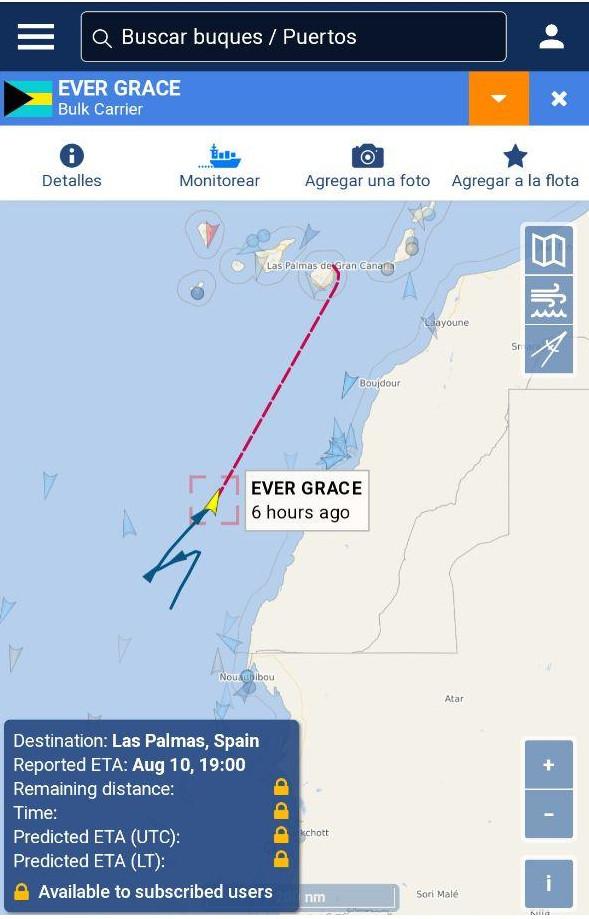 Track of the merchant vessel Ever Grace from the 10 August 2021. Source: Vesselfinder.

What signified rescue and a passage to the Canary Islands sadly also meant an abrupt end to life for four people who were part of the group. According to what we were told, they died as some of the people on board stood up and ran towards the rope the merchant vessel had thrown and fell into the water. The survivors tell of the dread which spread among the people who remained on board as they struggled to stay out of the water. Once on board the Ever Grace, one woman who suffered from diabetes and the lack of medicine during the trip was treated with oxygen. A friend of hers, with whom she set off,  woke up the next morning realizing that her friend had not survived the night.  In total 14 people lost their lives during the journey.

After a devastating 15 days at sea, the people finally reached the port of Las Palmas. Reaching out to the survivors, one woman sends us a voice message:

I was on the boat. […] It was very hard, we were on sea for 15 days, without any food or water. Many people died. Myself I’m fine, due to the protection of God. A survivor.

Also one of the family members tells us about the mixed feelings after the journey:

I’m very happy because my relatives are safe in Las Palmas and hopefully they will arrive soon to the mainland to meet me, but on the other hand I’m extremely sad about the dead and the suffering of the dead friend. Very contradictory feelings. I’m very concerned about the mental health of my sister after having been 15 days at sea.

For one of the alleged organizers of the journey who arrived to the Canary Islands, the aftermath began. He was arrested and is now being detained based on charges of homicide. This fits the continuous development of criminalization of people on the move. Instead of letting people access commercial flights or ferries to Europe, the European states focus on the narrative of reckless smugglers. This is a tendency which, unfortunately, can be seen on other routes in the Mediterranean as well, for instance the case of the four libyan footballers.

We demand justice for the 14 people who died in this case and for all of the lives which have been lost at the borders! We urge the Spanish government to implement identification procedures for border victims and to offer families, who search for their loved ones, a way to submit tracing requests. We demand the abolition of the border regime which knowingly leaves people to drift, dehydrate, starve and drown. Freedom of movement for all!