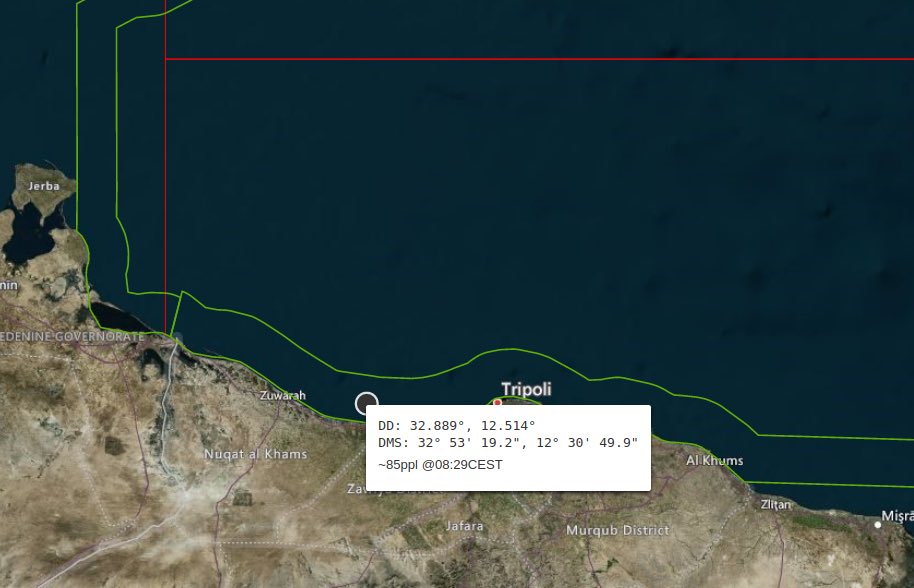 Location of the shipwreck in the making. Image: Alarm Phone.

Again, we are witnessing how the so called Libyan Coastguard fails in saving lives

Today, at 08.00h CEST, the Alarm Phone was alerted by ~85 people on board a rubber boat in severe distress just a few nautical miles off the Libyan coast. The people told us that part of the boat was deflated, and that 2 women and 3 children had gone overboard and drowned.

We immediately informed all authorities about the urgent distress situation via email.

At 8:29h, the boat was at the following GPS position: N32.888669°, E012.51387°. At this point the boat had already been drifting the whole the night, just 5 nautical miles off the Libyan coast. During the next hours, the people in distress reported that more and more water was entering the boat.

Since 9:30h, we have been trying to reach the so-called Libyan coastguard on seven different telephone numbers – without any success: we also contacted MRCC Rome and RCC Malta, who either told us they were not responsible for the area, or did not pick up the phone. At 10:50, we again sent an updated GPS position to the authorities (N32.9131° E012.51409°), again without answer.

At this point, we were calling the Libyan coastguard on nine different telephone numbers. Only at 11:52, one of the numbers got through, and the so-called Coastguard told us that an asset was going in the direction of the distress case, but they were not able to tell us more. At 12:48, the so-called Libyan coastguard confirmed they had sent a Rhib, but had lost contact to their own asset. At 13:03 we again received an updated position from the people in distress (N32.91569°, E012.51932°), which we immediatly forwarded to authorities. The people on the boat also start calling the coastguard themselves, demanding to be rescued, and only received vague replies. We continued calling the Libyan Coastguard on nine different numbers. The few times they picked up, the “officer” only spoke Arabic, although according to the SAR convention any MRCC should be able to communicate in English.

At 16:12 CEST, a Libyan officer wrote down the latest GPS position and told us they will try to see whether they are able to send a rescue boat, but would only confirm after one hour. At 17:01 we received the last GPS position from the people in distress (N32.8724°, E012.45297°), and they reported that water was coming into the boat very quickly. The whole time the people were not moving, besides a bit of drifting, which means that “authorities” knew their location at every moment. Since then, we tried to continuously call the so-called Libyan coastguard, without success. Our last contact with the people in distress was at 18:39, and we have not been able to reach them anymore ever since.  They might be drowning right now.

As several times before, we are now witnessing how the so-called Libyan Coastguard is very fast in intercepting and capturing moving boats fleeing Libya, as ordered by the EU-states, but only to force them back to Libya, where they suffer inhumane and often deadly conditions. The European border regime claims to be humanitarian, but it is not. It is very clear that they pay the so called Libyan Coastguard to prevent people to reach European soil, even if this comes at the cost of human lives.

We hope that at least some of the ~85 people will finally be rescued – many hours after our alert. Even if some will hopefully survive their flight attempt, many were left to die during hours of deliberate non-assistance. This is yet another example of the complete unwillingness of the so-called Libyan Coastguard to save lives. This is not by accident or by lack of resources, but by design: it is the very deliberate consequence of the deadly migration regime that is building and financing them.

The Alarm Phone has been publishing updates about this shipwreck in the making since the early morning hours and is reporting live updates about humans drowning in front of the very eyes of the European public. Nobody can claim not to be informed or to not be aware of what is happening to migrants fleeing via Libya to search for a better life – day by day.

The European states praise the so called Libyan Coastguard for their efforts to save lives, knowing very well that they do the exact opposite: they are the European tool to keep people on the move outside Europe, and to let them die.

We will hold them accountable for every single life they take.

Abolish the so called Libyan Coastguard and destroy the European border regime!