Several sources speak of a shipwreck with dozens of the approximately 65 people on board dying. We await more information.

We called for rescue, but all authorities rejected responsibility. Europe, this is the result of your policies – another mass murder in the Mediterranean Sea.

In this first report, we give an account of this distress case and provide details.

On Saturday afternoon, 15 August 2020, Alarm Phone was alerted by a boat in distress with approximately 65 people on board, just outside Libyan territorial waters. We alerted authorities several times and shared GPS positions of the boat in distress, but no rescue operation seems to have taken place. We lost contact to the white rubber boat after our last call on Saturday at 22.25h CEST, where the people  had desperately asked for help. Relatives have contacted Alarm Phone, extremely worried about their loved ones. We demand immediate answers about the fate of the approximately 65 people, and on the actions taken, or not taken, by the authorities. 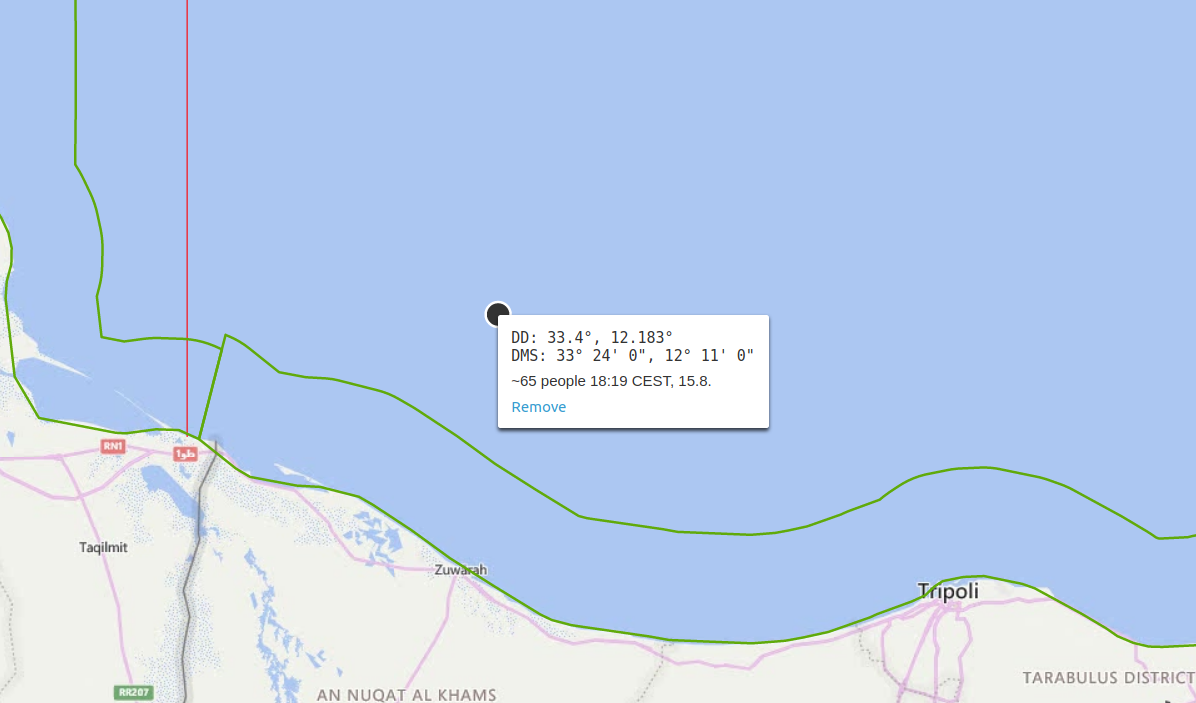 Summary of the events

On 15 August at 16:48 CEST, approximately 65 people in a white rubber boat in distress reached out to Alarm Phone. The people, among them five women, two of them pregnant, fled Libya in search for a safe place in Europe. The people alerted us, saying that their engine had stopped working and that they did not have any food and water left. The people on board said they were from Syria, Somalia, Egypt, Ethiopia, Sudan and Guinea.

The people in distress read their GPS position (16:48h CEST 33N252416, 12E38249), which showed them in international waters, just outside Libyan territorial waters. We tried to confirm the GPS position several times, but due to the difficult situation on board, we did not manage to receive a confirming second GPS position until later on.

At 18:04 we emailed all Maltese, Italian and Libyan authorities with the details and GPS position of the boat in distress.

At 18:23 we sent the updated GPS position to all authorities via email, and we tried to both reach the so-called Libyan Coastguard and the Armed Forces of Malta on the phone, but they did not answer.

At 18:39 we reached MRCC Rome on the phone. They confirmed they received our emails, but said the positions cannot be correct.

Only at 19:15 did we manage to reach the so-called Libyan Coastguard again – on only one of several numbers: +218 91 320 5769. The officer took the information, but said we should also inform Tunisian authorities.

At 19:47 we also forwarded all relevant information about the boat in distress to the Tunisian Coastguard. We then called them at 20:04, but they said we should call back on Monday as they were not working until then.

At 20:24, a Libyan officer said he could not confirm a search and rescue operation, because the engine of their patrol vessels had problems and that they had two other targets, and we should call Tunisia.

At 22:19, we tried to reach the so-called Libyan Coastguard again, but failed. We sent another email to all the involved coastguards.

The last time we were able to reconnect with the people in distress was at 22:25 CEST (15 August), when the person on the phone was panicking and screaming into the phone, saying that people were about to die and that they needed immediate help. This was our last contact to the boat. Since then, we have regularly called them, but without success.

Alarm Phone tried to reach the so-called Libyan Coastguard several times, but nobody answered until 01:01 CEST (16 August), and only on one of several numbers (+218 917598483). We gave them the information about the case, but they just replied: “tomorrow”. We insisted saying that it was an emergency but he hung up. Alarm Phone tried to call again, it rang, but no one picked the phone.

On the 16 August, after no contact for nearly 24 hours, around 21h, the credit of their Thuraya Phone dropped. Since then, nothing changed.

For two days now, we continue to search for information about the fate of the people in acute distress. No authority is answering our questions: where are they? what happened to the 65 people in distress in a white rubber boat off the coast of Libya?