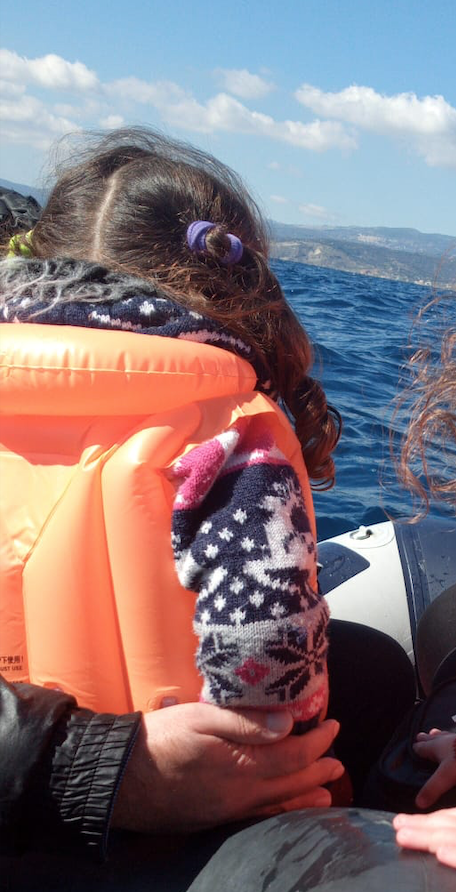 After Turkey publicly announced to open its borders, we witnessed shocking developments in the Aegean region with Greece and the EU drastically ramping up the militarisation of its external borders. Violence against migrants along land borders and at sea is escalating. We have directly witnessed several cases of non-assistance of, and attacks on, migrant boats, deliberately putting people’s lives at risk.

Between 1-3 March 2020, the Alarm Phone was alerted to 14 distress cases in the Aegean Sea. Only three boats managed to arrive in Greece. In many of the distress cases we documented grave human rights violations, including shootings and other attacks of boats by masked men who would remove engines and leave people behind in acute distress, as well as many push- and pull-back operations, some clearly intentioned to sink migrant boats. Repeatedly, Frontex and Greek coastguard forces were simply observing boats in distress, refusing to intervene for several hours. We also saw how Greek military forces and fascist groups attacked migrants when they reached the shore. On Monday we learned that a child had drowned off Lesvos on Sunday.

Turkey and Europe are playing a dangerous game with people’s lives and give further impetus to fascist groups to carry out attacks on migrants and supporters. Instead of seeking to uphold the human rights of people in precarious situations, the EU promises to further strengthen the Greek external border and to support Turkey in its ongoing massacres in Syria. We denounce these shameful developments in the strongest terms and demand the immediate end to the militarisation of the border and the mass human rights violations at sea and on land.

The Alarm Phone experienced 2015’s summer of migration very closely. We were part of a chain of solidarity that emerged during that time. In contrast to the images of chaos and panic spread by the media and political actors back then and now, we want to advocate for a different view, one that empowers people and compels them to act. Since 2015 we have learned that it is possible to create change. We have made friends and allies on the Aegean Islands who continue to welcome newcomers to Europe. We stand together with them and all those who have to fight against fascist attacks and the Greek and EU agenda of border miliarisation. We stand together with all those who believe that freedom of movement is the only solution to end the spiral of violence that is turning the sea into a mass-grave. We keep on building a strong movement to open paths for the people to reach desired cities of arrival – we will not stop until we reach our goal of freedom of movement for all.

The Alarm Phone provides here below a summary of the distress cases that we have been alerted to in the Aegean Sea, between March 1 and March 3.

On March 1, at 3:24h CET, we informed the Greek Coastguard of a boat in distress between Skala Mistegnon and Panagiouda, carrying 49 people, including 18 children (https://twitter.com/alarm_phone/status/1234026193772535808). The people on board told us that they had been attacked twice by mask-wearing individuals on a speedboat who destroyed the engine of their boat and took the petrol. They reported that the Turkish Coastguard had observed the incident but failed to intervene. We informed the Greek Coastguard about this incident at least nine times by phone and email. With no help in sight, the people in distress started to row toward Lesvos with their hands. At 14.30h we learned that this boat was in the port of Thermi on Lesvos. There, fascists insulted the people on the boat, preventing them from disembarking (https://www.facebook.com/stonisi.gr/videos/237476987415640/). Eventually, the Greek coastguard pulled the boat toward a different location. The authorities have failed until today to confirm the rescue of the 49 people to us.

On the same day, at 10:40h, nine people, including three children, reached out to us when in distress near Chios (https://twitter.com/alarm_phone/status/1234070020591947776?s=20). They sent us a picture of a ship near them that was just watching but not rescuing. We identified the ship as the “Hellenic Coastguard SAR-518 Chios”. We alerted the Greek and the Turkish Coastguards several times, but they refused to undertake any action, despite being informed that the lives of the people on the boat were in severe danger. Even though we asked for information about the fate of the people on board, Greek authorities have still not answered our questions. We lost contact with the boat. Their last known position was 38.29°N, 26.19°E.

Also on 1 March, a boat with 35 people on board was returned to Turkey by the Turkish Coastguard. According to information of a relative, their engine and petrol were stolen during an attack at sea, carried out by unidentified forces. Although they had come close to Petra beach on Lesvos, they were brought back to Turkey.

Still on the same day, we were alerted by another boat in distress off the coast of Lesvos, carrying 35 people, including 11 children (https://twitter.com/alarm_phone/status/1234104577647050753). At 11:57h, we forwarded their distress to the Greek Coastguard and shared the following GPS location: N39.23°, E26.55° (at 11:50h). The people were urgently asking for help. As in previous cases, the people reported that their engine and their petrol had been stolen in an attack at sea. Spotters on the shore in Lesvos documented the presence of at least two different boats nearby: one Greek Coastguard vessel and one Italian Frontex vessel. Again, instead of rescuing the people in distress they were just circling around them. The people told us: “They are only making waves! We are very afraid! Now they are driving away from us. Please help, we need help.” At 14:52h, the people informed us that water started getting into the boat. They said that everything was wet and they were scared to be forced to spend the night at sea. We witnessed another case of non-assistance while the world was watching! Even though we regularly updated the Coastguards with updated positions of the boat in distress (last update at 19:00 CET: N39.23°, E26.49°), they remained inactive. Again, people started rowing with their bare hands in order to reach land. At 21:48h, only after we informed the authorities in Mytilene that the boat had a hole and that the people were in immediate danger of drowning, they confirmed that they were conducting a rescue. The people in distress had waited for over 12 hours before being rescued. Letting them wait so long at risk of drowning was torturous.

Also on March 1, at 22:34h, we were informed of two boats, carrying around 80 people, among them 25 children. They were intercepted by the Turkish Coast Guard, which reportedly shot on them. The last GPS position we got from them was: 38.3220180, 26.3020510, showing them at a small harbour near the Turkish village Alacati. The people asked us for urgent help as they were freezing due to the weather and their wet clothes and stated that they need shelter, dry clothes, and food for the children. Unfortunately, we have not been able to re-establish contact with this group.

Later that night, still on March 1, we received information about another attack on a boat carrying 40 people from Turkey in direction to Chios. Again, the engine and the petrol were stolen. We later heard that the boat had been intercepted and brought back to Turkey. We are still searching for details about this boat and trying to find out where its passengers are.

Also on March 1, shortly before midnight, the Alarm Phone was alerted by a boat carrying 45 people on their way to Chios that was presumably pushed back to Turkey. The people on board reported an attack in which their engine got stolen. Afterwards they say they were pushed back into Turkish waters by the Greek Coastguard, before being pulled back to Turkey with a rope by the Turkish Coastguard. At 04:17h on March 2, we spoke with a very exhausted person who had been on the boat, and who told us that the Turkish Coastguard brought them to a forest and left them there. We then contacted Turkish authorities and the UNHCR and requested immediate help. The latest position we received was N38.494412°, E26.412142°. We informed the authorities that the people needed urgent help and we hope that everyone is well now, wherever they are.

On March 2, at 2:50h, we were alerted by another boat in distress near Farmakonisi, carrying 15 people, including a pregnant woman and three children. Once more, the people on the boat reported that they had been attacked and that their engine was stolen. In addition, they reported that the Greek Coastguard shot at them. At the time of contact, they were in severe distress and asked for urgent help, as water was entering the boat. At 2:58h we contacted the Greek Coastguard to inform them about the case and demanded immediate action. Shortly after, at 3:20am the people on the boat called us and reported that they were being pushed back to Turkey. Their position at the time was : N37.32°, E27.12°. Video footage we received from the people on the boat showed two boats pushing the migrants back towards Turkey. One of them is clearly identifiable as “Sahil Güvenlink 31” and belongs to the Turkish Coast Guard. According to our information, a Greek Coastguard vessel was also involved in the push back. When they contacted us, the boat was really close to Farmakonisi. Since the beginning, they were afraid of the Greek Coastguard, as they feared a pushback. A fear that was justified, as it turned out.

A few hours later on March 2, we were informed about another boat in distress near the island of Chios, carrying at least 20 people. They were already very close to Chios, when they were attacked at around 6 or 7am in the morning. Also in this case, according to the people on board, their engine and their petrol were stolen by what they identified as “Greek police”. At 12:45h, we called the Coastguard of Chios to find out what happened to the people. A person told us they knew about the boat and that the travellers were on the island of Inousses. However, contrary to that, relatives of the people later informed us that they had been brought back to Turkey . Until now, we have not been able to clarify where exactly the people are. We will continue investigating.

During the night to March 3, we were alerted by another boat in distress on its way to Samos. The boat carried 50-55 people, including 20 children. They reported that they had been attacked by a Greek boat. The attackers took their engine and their fuel, and beat them. The people on the boat were urgently asking for help, as water was entering the boat. At 02:18h, we called the Turkish Coastguard and informed them about the situation. Shortly after, the people on the boat called us again. They were very scared and said: “the Greek soldiers are going to kill us all, they put a rope on our boat, they are pulling us, they are going to beat us and kill us, they shout at us.” Right after that, at 2:54h, they shared the following position with us: N37.85°, E27.12°. Eventually, they were intercepted and brought back to Turkey.

Shortly after, on March 3 at 9:39h, we learned about a severe attack on two boats carrying 25 people each, both on their way to the Greek island of Kastellorizo. One of the boats was reportedly shot at by the Greek Coastguard within Greek territorial waters. While the first boat returned to Turkey, the second boat continued its journey. According to the information we received by the people on the first boat, one or two men on board the other boat were injured by the shots fired. Eventually, also the second boat returned to Turkey and the two injured men are said to be treated in a hospital.