"Hello, my friend, I am from the Alarm Phone" - How we use our voices to show solidarity and empower people on boats 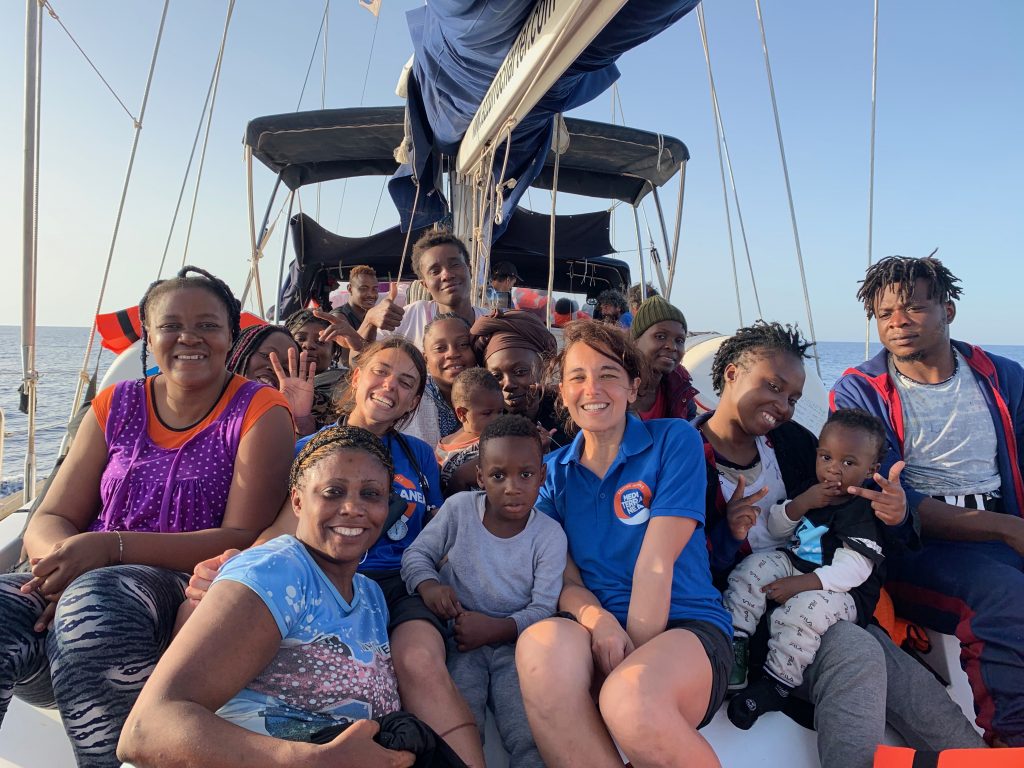 When you talk with travellers on a boat in distress, you have only your voice and nothing else and often only very little windows of time to communicate. There have been more than 2.500 conversations or WhatsApp-chats with people on boats in all three regions of the Mediterranean. Some of these conversations we documented in great detail because we needed to write down every piece of information in order to avoid getting over-whelmed. Others remained in the WhatsApp-chats and on some shift-phones until they broke. And again others only left a trace in the memories of two peoples. This article is the attempt to share some personal experiences to highlight how we use our voices to show solidarity, to build short-term relationships and empower people in moments of distress.

Within five years we learned that small things can be decisive to understand one another. To start a conversation with “hello my friend” and with saying who we are, is a given. In this way we say ‘welcome’ in a moment when everything seems to be blocked. It can make clear that we are neither the police nor the coastguard. It is you and me who will now communicate. We will take time to sort out what is needed.

Sometimes we have difficulties understanding each other – not only because of language barriers. Distress can sometimes make voices shrill and incomprehensible when people are scared to death. Panic can also make words meaningless. One of the most important tasks is to break first that spiral of fear so that it is possible to speak and understand one another. We have learned over time how much repetition can help when someone is in panic.

Despite these obstacles, we are surprisingly often able to enter a conversation. Besides the facts that you have to collect, you can some- times convey a sense of solidarity through sound, a sound that will echo still in your ears when the communication has ended.

Sometimes, there are brief conversations that last for maybe three minutes or less – a woman shouting into the phone: “hallelujah, they came already! We are safe!” The sound of the victory cry ‘BOOOZA’, uttered by those who just arrived in Spain is something you will never forget. Some- times a “thank you we are safe” comes with a thumbs up or a smiley on WhatsApp.

Sometimes there is silence. The battery died or the phone was thrown into the sea to avoid detection by coastguards. Sometimes the voice itself is silenced by the water of the sea. These are the moments when silence can break your heart.

We build relationships – most of them will only last until the final call has ended. Rarely, and only when we are lucky, do we have the time to say goodbye. Saying goodbye as a way to say ‘welcome to Europe’ or instead “the next time, inshallah you will make it” – and to wish strength and pass on with your voice as much energy as you can.

I will never forget one case from the Central Mediterranean, in the night from the 29th to the 30th of May 2019. We started the nightshift and the former shift team handed over a distress case in the Central Mediterranean. A boat with 90-100 people, among them about 20 women and 15 kids had made it nearly to the Maltese Search and Rescue zone. During the day they had already been spotted by the “Moonbird” NGO aircraft. A military plane circled over the boat and a boat of the Italian navy (P 490) was nearby. Nevertheless, Italy and Malta did not respond to our calls for rescue. We got in touch with the boat:

00:13 (30.5.2019): Talked with the people again. “It is too much cold. The kids are suffering from the cold, we are afraid for them. They are wet and freezing. There are fifteen kids, the youngest is 9 months, then 3 years, 4 years… We tried to move the kids in the corner of the boat, where is less water. But the boat is not stabile, so moving them is difficult. There are 20 women or so on here. The women are strong but the one who is pregnant is very sick.”

We speak in a way that feels familiar, as if we knew one another for a long time. Hours later, when I switch the phone to speaker mode as I cannot bear to listen by myself anymore, my shift partner points out that this voice sounds like the voice of a friend – an old friend who we met in the struggle against deportations in a group of self-organised refugees. The man’s voice on the phone is a younger version of our friend’s voice, which seems to build a bridge of friendship.

00:47 Reached the boat. They are really exhausted. “Some people are panicking. Some people are out of their mind because of fear.” Decide to stick to the truth and to tell him that the coastguards are not telling us when they will come for their rescue. He says: “This is not good for us, they will not rescue us. Bad sign.” He agrees nevertheless it is important to give people hope to avoid more panic which is dangerous.

01:20 Talked with the boat again – again we cannot promise when coastguards are coming. He says: “It is so fucking inhumane what they are doing with us. We are here in the sea for more than a day now. They came with airplanes helicopters and everything. They know where we are and they just wait for the Libyans to come tomorrow to pick our corpses. Those who will still be alive will maybe then also go into the water because they want rather to die than to go back to Libya. Why can’t they let any fisher boat save us and then at least to avoid people to die. They can bring us to whatever shitty prison. But this situation here is so inhumane, you cannot imagine how we suffer.”

We tell him that we will stay with them until the end, whatever happens. We promise that we call the coastguards and inform the public to raise pressure. He thanks us for being with them.

He sounds extremely exhausted, it is calm in the background as if they don’t even have energy for panic anymore. It is a deadly silence and we just repeat we are with them.

07.50 Boat called again. “We are so tired.” We tell them that we have launched a pressure campaign in Italy and contacted parliamentarians, the media, etc. We also say that there is a cargo vessel 1–2 hours away and that we make pressure to change its course and rescue.

08.00 Boat called. “A 5-year-old girl died.” We can hear people scream in the background. “One balloon is losing air. We hope the boat can reach us.”

It happens what always happens in these situations: we want to believe that this is not true. That the people only passed on this information to help us raise pressure. The hope that a child might not be dead. In this case we did not find out afterwards what happened. The death of the 5-year-old child was so far not confirmed, though people said after disembarkation that several people had died during the journey.

08:19 Boat called again. “We see a ship. It is far away but big. Coming from where the sun is.” One can feel that people are getting excited.

08:30 Boat called. “There is P490 written on the boat.” We instruct people on how to prepare for rescue.

09:05 Connection to people very bad but they said that a rescue is starting now. He said “goodbye”.

The last words we shared were wishes: “I hope you will reach Italy safely. Take care! Goodbye and hope to see you in another place in another time – somewhere in Europe.”

Welcome my friend and goodbye – I hope you will arrive one day in a place of safety and maybe, who knows, we will meet somewhere on the street and we will not know that we had shared this experience. And maybe, one day, another fighter for freedom of movement will remind us of our common struggle through a voice that sounds like the voice of an old friend.