Boat with 35 Migrant Travelers in Distress Refouled to Turkey 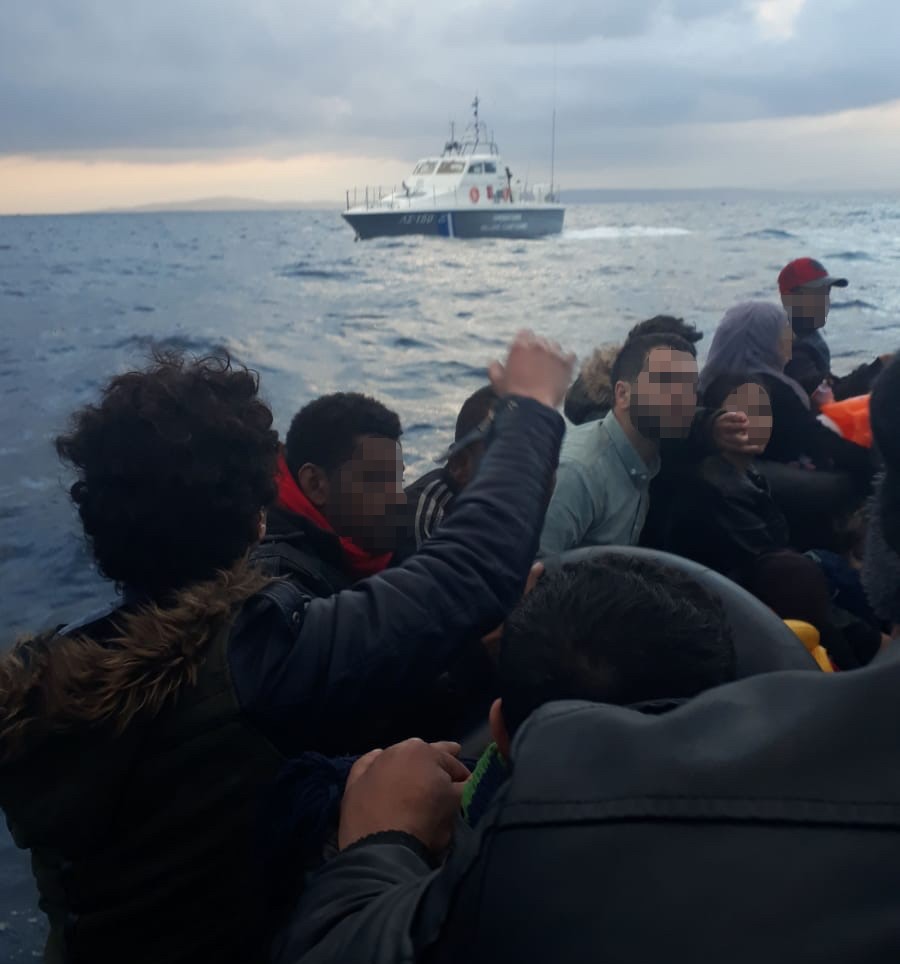 In the early hours of April 11, the Alarm Phone was contacted by a boat with 35 people on board who had escaped from Syria, Iraq, Palestine and Somalia and were in distress at sea. The group included ten children, including infants, and five women, and there were individuals with severe war injuries on board. Our Alarm Phone shift team swiftly alerted the Greek Coastguard to the situation, at 4:57 am CEST, when the boat was clearly located in Greek territorial waters. Although we received several more GPS locations from the travelers later, which we forwarded to the Greek Coastguard, the Greek authorities informed us that the boat had been ‘found’ in Turkish waters.

However, according to both the GPS positions and the direct testimonies of the migrants, their boat had entered Greek territorial waters.

The Greek Coastguard was the first present at the location of the boat in distress and was thus obligated to intervene and conduct a rescue operation. However, as the migrants on board stated, the Greek authorities instead tricked them when asking them to follow the Greek Coastguard vessel ‘towards Greece’, when it was in fact moving toward Turkey. When they realized what was going on, they sought to turn around and move again toward Greece. At that point, they had reached Turkish waters and the Greek Coastguard prevented them from escaping while leaving it to the approaching Turkish Coastguard to carry out a ‘rescue’ operation. Requests for help and rescue of the refugees were not heard by the Greek Coastguard.

When our Alarm Phone shift team inquired about these measures, the Greek Coastguard attempted to convince us in a phone call that they had in fact found the migrant boat at the location where it was picked up by the Turkish Coastguard. They asked us to close the case as a rescue operation had been successfully conducted by the Turkish Coastguard. We did not heed their request as we commonly close distress cases only after final confirmations by the migrant travelers themselves. In their testimony to us, the migrants confirmed what the transmitted GPS position had already indicated: the Greek Coastguard had denied a rescue operation and instead returned the boat to a location in Turkish waters. After this thwarted attempt to flee Turkey where the escapees fear further refoulement to their countries of origin and war, these people will most likely try once more to reach Greece via the sea, which means that in order to find safety, they will have to risk their lives once again. In 2019 already 14 people died at the Turkish-Greek borders during the attempt to escape to safety.

At 4:57 am CEST on April 11, 2019, the Alarm Phone first informed the Greek Coastguard on the phone about the distress situation. Upon their request at 5:07 am, we also sent an email to them as well as the UNHCR with the details of the case, such as the GPS position of the boat near Agathonisi Island (37.413639, 27.108189). At 5:23 am, the people on the boat asked for rescue as, according to them, “water came into the boat because of the rising waves”. At 5:51 am, the Greek Coastguard arrived at the location, as the travelers confirmed to us in a message.

From 6:02 am onward, the phone on the boat could not be reached anymore. At 6:29 am, the Greek Coastguard called the Alarm Phone to state that they seemed to have established a visual of the boat, but that the boat was not at the location we had informed them about. Instead, they said, the boat would be located on the Turkish side. They stated that they believed it was the boat in question, as visibility in the area was good and there was no other boat in the vicinity. They said they were unable to reach the people through the phone number we had provided but that they were clearly on the Turkish side.

At 6:46 am, the Greek Coastguard called again and reported that they could observe how the boat was being rescued by the Turkish Coastguard. The Greek authorities called us repeatedly to convince us to close the case to which we responded that we could not as we had not yet received the final confirmation by the people concerned.

We were able only a few days later to reconnect with the migrant travelers. They gave us the following testimony: “We started around 3:30 am CEST from the Turkish coast. After three hours of driving first towards Nera / Agathonisi and later slightly towards Farmakonisi, we were stopped at 5:50 CEST by the Greek Coastguard. It was very cold and our kids were screaming from fear. Water was entering the dinghy from the waves. It was a grey and white coast guard boat. There were four officers dressed in blue uniforms. They were making circles around us. They shouted: “We will save you. Follow us.” They pointed us to go in another direction. We get confused and followed them a little bit. Then we stopped. We understood we were driving back. They ordered us to turn off our motor. We were asking for help. We showed them our kids in the air and begged them to let us stay in Greece. But they said, we were doing something illegal. We had entered the Greek waters. After 30 minutes a Turkish Coastguard boat arrived and the Greeks left. We were brought to a Turkish police station. It was a one and a half hours drive back. They said if we’d ever try again to cross illegally to Greece, they’d deport us back to our countries.”

The GPS positions we have gathered match with the direct testimonies we have gathered from the migrant travelers. The Alarm Phone denounces strongly these illegitimate measures taken by the Greek Coastguard who tricked people in acute distress at sea into returning to a place where they cannot find protection.

Positions sent to Alarm Phone displayed on the map and show the group was in Greek waters.