The captain in charge of the Greek Coastguard vessel shouted at the migrants: "I will kill you if you come here again." He requested this be translated and quoted word by word.

Below you can find translations of this article in Turkish and Greek attached as PDFs. 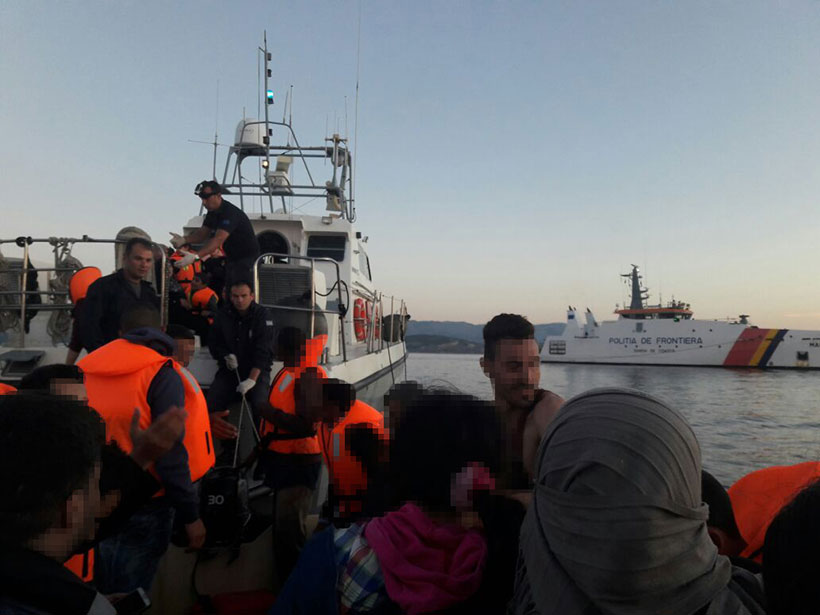 Between Chios, Greece and Cesme, Turkey, a refugee boat with adults and children escaping war and conflict in Syria, Iraq, Eritrea, and elsewhere, were illegally pushed-back to Turkey. Escaping violence to find security in Europe, the refugees were threatened with gun violence when being forced back to Turkey, where they will not find safety. They had already made it into Greek territory but the Greek coast guard, while promising safety and in the presence of two Frontex vessels, returned them to Turkey.

Detailed report on the incident:

On Saturday morning, the 11th of June 2016, at 3:59 am, the Alarm Phone received an emergency call from a refugee boat located between Cesme and Chios Island in the Aegean Sea: “We are about 53 refugees from Syria, Eritrea, Iraq and a few people from other countries in distress in a small boat. There are 14 children with us and 3 elderly.” At 04:05 am, they contacted our shift team again and said: “The Turkish coast guard is following us.”

As a refugee remembers later in a second conversation: “We told them we want asylum in Greece. We couldn’t tell them anything more. They didn’t allow us to speak. We wanted to tell them we escaped from Turkey where we were not safe. There were 5 officers on this Greek boat and there were two more boats: One from Portugal, I could recognize a Portuguese flag, and another big white boat, where we didn’t know from where it was [we recognized it on the photo as a Frontex boat from Romania]. Our position at this time was 38.2602140, 26.1657840.”

At 5:22am, the Alarm Phone received another message from the refugee boat: they had not been brought to the Greek island, but, instead, had been handed over to the Turkish coast guard. “They held their guns on our heads and threatened to shoot if we wouldn’t move to the Turkish boat. The boss of the Greek Coastguards said in English and it should be translated for all people: ‘Tell them I will kill you if you come here again.’” As the Alarm Phone learned later that day, the refugees were brought back to the port of Cesme and detained.

The Alarm Phone strongly denounces the inhumane game Europe keeps playing with refugee lives at risk in the Aegean. We denounce the illegal push-back operation conducted by the Greek coast guard in the presence of Frontex boats. Refugees escaping war and death were misled, promised rescue and offered safety in Europe, while, in reality, authorities had seemingly already arranged to return them to Turkey, where they fear persecution. Threatened with guns pointed at their heads, they were forced to return to detention and the danger of chain-deportations from Turkey, even though they had asked for asylum in Greece. European border militarization targeting these 39 adults and 14 small children, instead of offering protection, force them risk their lives once again. Almost 3.000 refugees have died in 2016 already when trying to cross the Mediterranean, at least 376 of them in the Aegean Sea.

Stop illegal push-backs! We do not accept any more deaths!

Safe passage to everybody! Ferries not Frontex!

Photo 3 and 4 are taken on board of the Turkish Coastguard vessel, on the way to detention in Turkey.