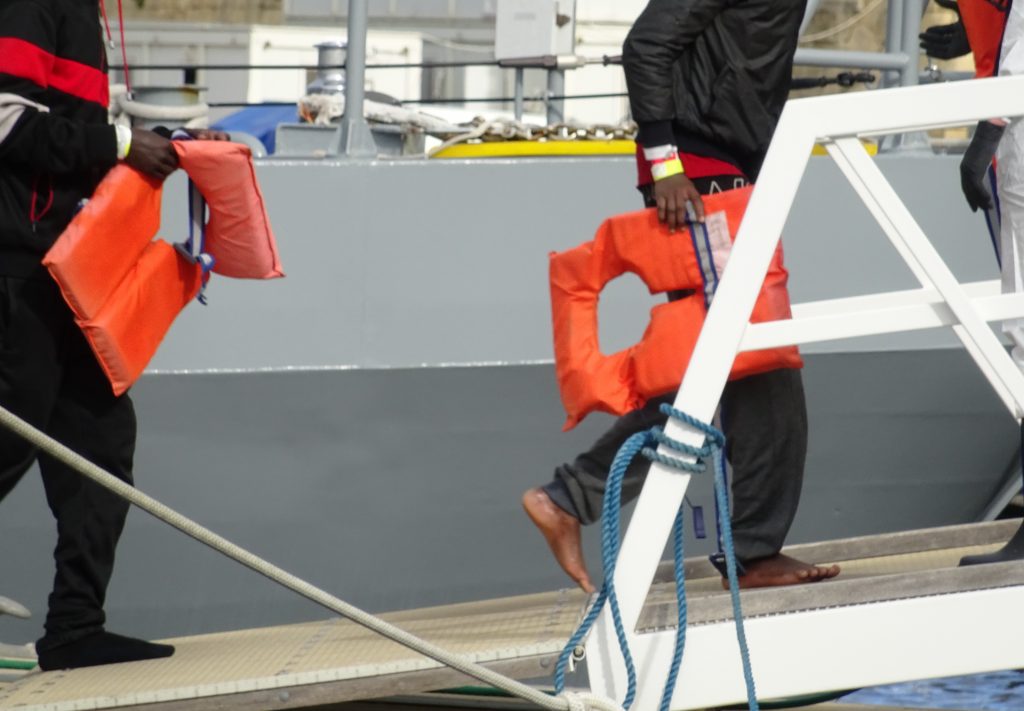 Over merely four days last week, 9-12 January, the Alarm Phone was alerted to 22 boats in distress escaping from Libya, carrying about 1,150 people. About 400 people who had reached out to us were rescued to Europe. Overall, about 1,500 people were trying to escape Libya over these four days, and 503 of them succeeded. 237 people on five separate boats in distress were rescued by the amazing efforts of NGO crews and through the cooperation of the Civil Fleet: Sea Watch 3, Moonbird, Open Arms, and Alarm Phone. 119 people are currently on the Sea Watch 3, 118 on the Open Arms. 266 people were rescued by the Armed Forced of Malta who were alerted by the Alarm Phone. We know of approximately 97 people who arrived in Italy autonomously. At the same time, about 700 of the people who reached out to the Alarm Phone were intercepted by the so-called Libyan coastguards and forced back to Libya. We also learned of a shipwreck – according to the Libyan authorities the 65 people on board survived but we cannot verify whether this is true.

Repeatedly, we informed relevant authorities to the severe distress of several boats off the Libyan coast but repeatedly they did not act quickly or adequately. For example, on Friday, we were alerted by two boats in distress within the Maltese Search and Rescue zone with 50 and 54 people on board. We informed both Sea Watch 3 and Maltese authorities. According to the testimonies of the people in distress and of the Sea Watch 3 crew, vessels of the Armed Forces Malta were on scene, monitoring at least one of the boats in distress without rescuing the people, putting their lives in danger. They engaged in a rescue operation only under the pressure of Sea Watch 3 (https://twitter.com/seawatch_intl/status/1215982102535200771?s=20).

For several distress cases, we do not know what happened to the boats and their precarious passengers. We fear that many were intercepted by Europe’s allies, the so-called Libyan coastguard. Instead of being brought to safety, they were returned to the violence and hardship of Libyan torture camps they were seeking to escape from. We also fear that lives have been lost but that their disappearance will remain hidden.

The Alarm Phone was informed of yet another privatised pushback. A merchant vessel illegally returned 64 people to Libya after rescuing them near the Bouri Oil Platform. Upon arrival in Tripoli, some of the 64 people refused to disembark and, according to the testimonies of those who called the Alarm Phone in a state of terror, one person was shot by the Libyan authorities and his body was thrown into the sea (https://twitter.com/alarm_phone/status/1216042802699739136?s=20).

With the escalation of conflicts in Libya, we can expect that even more people will try to flee in order to seek asylum in Europe over the coming weeks: will they all have to choose between the unbearable violence of war and torture camps or the invisible violence of the sea and European deterrence efforts there? How many lives will it take, before Europe creates safe passages for people seeking safety and freedom?

Much of the violence off the coast of Libya over the past days would have remained invisible without the presence of the Civil Fleet. Besides creating safer passages to Europe and rescuing hundreds, the rescue NGOs, Moonbird and the Alarm Phone play a crucial role in counter-surveilling the Mediterranean, monitoring the authorities’ anti-migrant deterrence efforts and mass human rights violations at the sea borders.